Police believe a Thai woman kept a second safe house for the bombers to assemble explosives from these and other materials - as interrogators slowly wring information from the arrested foreigner (inset) whose identity is still unknown. Clockwise from top left: Explosive detonators, pipes that could pack bombs, far too many (probably fake) Turkey passports, and thousands of 5mm ball bearings, the size used in the Ratchaprasong explosion - four reasons the unidentified bombing suspect (inset) was taken into custody on Saturday.

Authorities are hunting for a Thai woman after materials believed to be used for bomb-making were seized from her room at an apartment in Min Buri district.

She was believed to know the perpetrators thought to be behind the Erawan shrine and Sathon pier bombings, according to police sources. The group was thought to be planning more attacks.

The woman is identified as "Misaloh", and rented room No.9106 at Maimuna Garden Home, an apartment in Bangkok's Min Buri district.

On Saturday night, a combined police and military force searched the room and confiscated several items which can be used to make bombs.

Found in the room include urea-based fertiliser, six 12x7cm bottles of flash powder, black and blue electrical wiring, four wristwatches, a table clock, a pack of bolts, decorative tree lights, an empty box for a walkie-talkie, a radio-controlled toy vehicle and a rucksack containing books. Police seized the items for examination.

The search was based on information gleaned from the foreigner suspect detained on Saturday in a raid at the Pool Anant apartment in Nong Chok district, where authorities seized bulk supplies of materials for making bombs, sources said.

The suspect is now being detained at the 11th Army Circle in Bangkok.

Following the Saturday night search, a team of 40 police and military officers went back Sunday to Maimuna Garden Home and searched the entire apartment again.

A welding tool was found in one room and seized for examination.

Police spokesman Prawut Thawornsiri said Sunday a network of foreign nationals is thought to be behind the Erawan shrine blast.

Pol Lt Gen Prawut said significant quantities of bomb-making materials including detonator cords and fuses seized from the suspect's room during Saturday's raid point to the possibility the suspect and his accomplices had several more targets in mind.

The evidence has been sent for forensic examination and the findings will confirm if they are linked to the Erawan shrine and Sathon pier explosions, he said.

The police spokesman said the detained suspect, who cannot speak Thai, has so far denied any involvement in the Erawan shrine bombing, he said, adding authorities cannot confirm his identity or nationality.

"He gave a certain amount of cooperation, saying where he travelled from. But we don't believe everything he said. So far he has made no confession," he said.

Investigators are not ruling out any motives at this stage and it is too early to conclude what role the suspect played in the attacks.

It is believed many other people, some of whom are likely to be Thai nationals, are involved, said Pol Lt Gen Prawut. He did not give a number.

One of the possible motives is the blasts were an act of personal revenge after police recently cracked down on foreign criminals including those running fake passport syndicates.

It is possible the suspect is involved in a syndicate that makes counterfeit passports for nationals who entered Thailand on the quiet and wanted to travel to a third country, he said. More than 200 fake passports were seized from the suspect's room, which lends weight to this theory, he said.

Police investigators have confirmed the two attacks are linked based on the type of the explosive devices used. 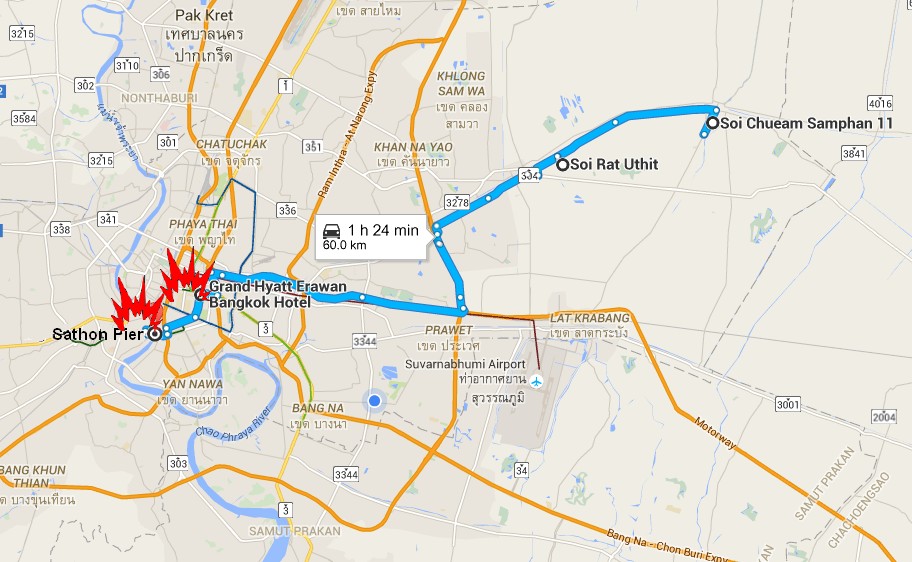 Geography of the attacks: According to current reports, the bombers and helpers rented rooms at two apartment houses in Min Buri and Nong Chok districts in Northeast Bangkok, and travelled to the two sites where they set their deadly explosives. (Map by Google Maps)

The Erawan shrine blast on Aug 17 killed 20 people and injured 130 more while the other bomb which exploded in the water near the Sathon pier the following day caused no injuries.

Pol Lt Gen Prawut said other pieces of evidence such as records of phone calls are also being examined. There are photos of possible accomplices in the suspect's phone that police are trying to verify.

Police are also questioning the cab driver who drove the yellow-shirt suspected bomber to Hua Lamphong station after he was found to have been contacted by the phone numbers which are thought to belong to the suspects.

The cab driver might have hidden some information from police but so far he has not been charged or detained, he said. He said it cannot be confirmed if the arrested man is one of the two suspects facing arrest warrants.

Besides the yellow-shirt man, an arrest warrant was issued for a man seen dropping a plastic bag with an explosive device near Sathon pier on Aug 17.

"He is one of the network definitely. Give police some time. There are several leads to follow and jobs to be done," he said.

A source in the National Council for Peace and Order (NCPO) said police and military officers are jointly questioning the arrested suspect and authorities are not ruling out any possibilities including human trafficking.

HANOI: Authorities in Vietnam's biggest city are urging the government to recognise positive rapid tests for Covid-19 to present a clearer picture of its outbreak, state media reported on Monday, a move that could increase the city's case total by 40%.