Police have matched the fingerprints of the suspect (centre) arrested in Sa Kaeo to those on a container used for explosives found at an apartment in Nong Chok district, Bangkok. (Photo of the National Council for Peace and Order)

Assistant police chief Prawut Thavornsiri said on television that fingerprints taken from the still unnamed foreign man matched those found on a container collected from a room at the Pool Anant apartment in Nong Chok. He was suspected of either making or carrying bombs used in the attacks in Bangkok on Aug 17 and 18.

The first male bomb suspect was arrested at the apartment on Chuam Samphan 11 Road last Saturday.

Police and soldiers arrested the second man in forest near the Thai-Cambodian border in Aranyaprathet district of Sa Kaeo before noon on Tuesday. He was said to be walking towards Cambodian territory and away from an official border crossing.

During interrogation he confessed he was at the Erawan bomb scene, police said.

Police chief Somyot Poompunmuang confirmed again on Wednesday morning that police believed the second arrested foreigner was the man wearing a yellow T-shirt suspected of placing a haversack containing the bomb under a seat at the Erawan shrine and then leaving, shortly before it exploded on Aug 17.

To assist with the identification of the bomb suspect, Pol Lt Gen Prawut asked the public for help contacting another man, wearing a blue shirt, who was seen on surveillance tape taking a photo of a friend at the shrine, about the same time. 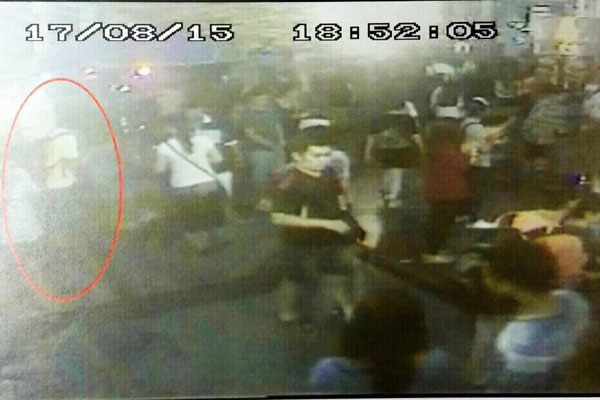 Detectives are looking for the man in the blue shirt on the lower right corner as his camera might  have captured a clear picture of the bombing suspect (in the red circle, left). (Photo from the National Council for Peace and Order)