Indonesian fires have blown an unhealthy haze over Hat Yai (above) and Trang, with officials handing out face masks but advising residents to stay at home. (Photo by Wichayant Boonchote)

The haze also worsened in Trang province, also the South, where motorists had to turn on their headlights due to poor visibility, according to officials.

Satellite images from Malaysia's Meteorological department showed there were 390 fires in Indonesia's Sumatra province, from where winds blow the smoke to neighbouring Malaysia and Singapore and Thailand. Thirty-one fires were also recorded in Indonesia's Kalimantan province on the island of Borneo.

The Malaysian Environment Department said areas with unhealthy levels of haze included Kuala Lumpur as well as parts of the states of Selangor, Kedah, Negeri Sembilan, Perlis and Penang.

Malaysian health officials warned residents with asthma and pulmonary problems to stay indoors until the air quality in their areas improves.

Flight activities at the airport in Sumatra's Jambi province were ground to a halt after visibility dropped to 500 metres, airport operation chief Parolan Simanjuntak said.

"We don't want to take risks, so all flights were cancelled," he said. 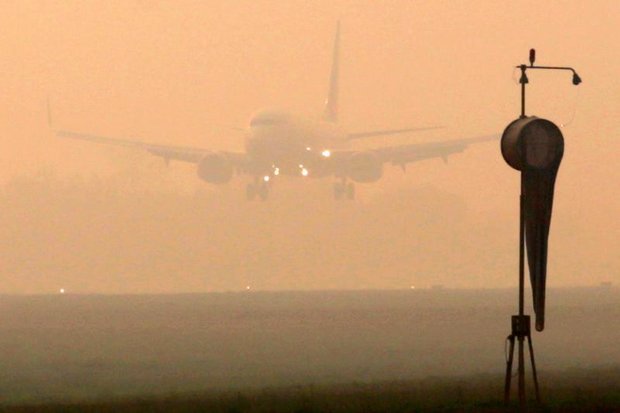 An airplane lands amid haze from the annual forest and brush fires at Sultan Mahmud Badaruddin II Airport in Palembang in South Sumatra. (EPA photo)

In the southern Thai city of Hai Yai, near the border with Malaysia, the haze has reached dangerous levels, according to provincial officials.

Particulate matter in the city rose to 123 micrograms per cubic metre on Thursday, which is already considered unsafe, officials said.

Open burning is common in Indonesia's Sumatra and Kalimantan provinces, as it is the fastest way to clear plantation and forest lands.