Govt crackdown may have spurred attack

Police are giving weight to possible connections between the Erawan shrine and Sathon pier bombings and Uighur smuggling rings allowing migrants to flee China and head to Turkey.

National police chief Somyot Poompunmuang yesterday said as police pieced information together, it was becoming increasingly clear that those who had lost out as a result of a government crackdown on human trafficking may be involved in the blasts.

However, he said police need to investigate further before they can determine a definitive link between the attacks and the smuggling of migrants.

He said the traffickers may not have perpetrated the blasts themselves, but it was possible they hired others to commit the crimes.

Sources at the Central Investigation Bureau (CIB) said, based on the evidence, all the suspects who have been detained or are still sought on arrest warrants are believed to have links with Uighur smuggling rings.

The sources believe the trafficking rings use Thailand as a jump-off point for Turkey-bound migrants.

Authorities previously seized more than 200 fake Turkish passports at the Pool Anant apartment in Nong Chok district, believed to have been used for smuggling Uighurs to Turkey, sources said.

Police earlier identified at least two suspects as being Turkish.

Yesterday, the Min Buri Court approved an arrest warrant for Chinese national Yusufu Mieraili, 25, who was detained in Sa Kaeo and taken to Bangkok after being found in possession of explosives. 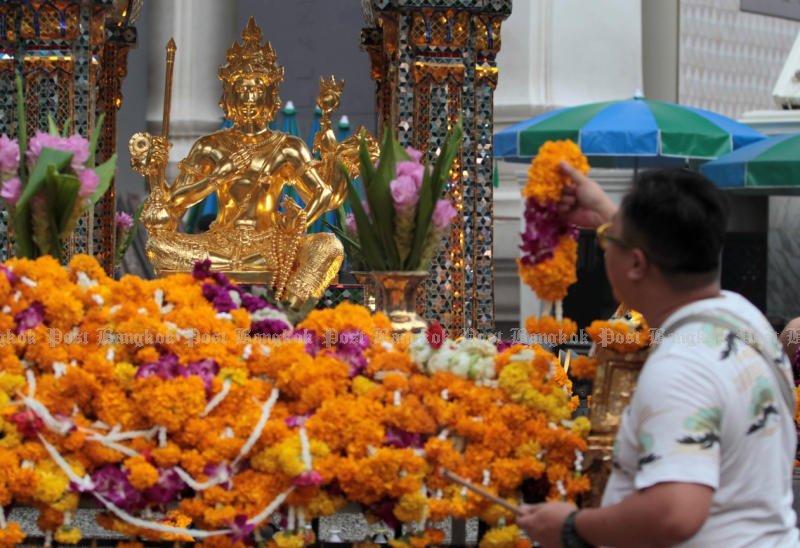 The Brahmin statue at the Erawan shrine was fully restored on Thursday, and one of the first post-repair visitors was an ethnic Chinese worshipper. As the statue regained its full shine, it was becoming increasingly clear that human traffickers of Uighur migrants are deeply involved in the Aug 17 bombing. (Photo by Chanat Katanyu)

National police spokesman Prawut Thavornsiri said the arrest warrant was issued based on a passport and evidence discovered on the suspect. However, authorities have yet to verify if the passport is genuine.

According to the passport, the man comes from the Xinjiang region, home to China's Uighur Muslim minority.

He is one of two suspects currently being detained, while another nine arrest warrants have been issued over the Erawan shrine and Sathon pier bombings on Aug 17 and Aug 18 respectively.

Pol Lt Gen Prawut said it was not clear if Mr Mieraili was the yellow-shirted man captured on CCTV as the man who allegedly planted the shrine bomb.

Pol Gen Somyot also said at this stage there was no evidence pointing to international terrorism.

CIB sources said there usually are two routes used to smuggle Uighur migrants into Thailand -- one flying from China to Thailand on tourist visas and the other by car to Myanmar where they travel by boat across the Andaman Sea before reaching Ranong and going on to Malaysia.

The first route takes the migrants to Lat Krabang or Nong Chok, where they stay to wait for fake passports that allow them to travel on to Turkey.

In a related development, police and soldiers on Tuesday arrested another suspect allegedly involved in the bombings at his house in tambon Pasemas in Narathiwat's Sungai Kolok district.

The arrest was made under martial law. The man was identified as 38-year-old Kamarudeng Sahoh. Authorities also seized a number of passports and border pass documents. The man was taken for further questioning at the 11th Army Circle in Bangkok. Security sources said they received a tip-off that the man was a key member of a human trafficking ring based in Sungai Kolok. They also received information that after the bombings, some of the perpetrators managed to leave the country across the border at Sungai Kolok with the help of Mr Kamarudeng, the source said.

The source also said that according to information from security intelligence agencies, the man is a key member of a human trafficking network smuggling Rohingya and Uighurs from Myanmar to Thailand.

He was tasked with making fake passports and border passes for these migrants.

The man once allegedly worked as an employee at a Narathiwat registry office and was sacked over accusations he arranged and facilitated the use of false ID cards.

He had been jailed for two years on human trafficking charges, sources said.

However, Marodee Binsama-ae, the village head at Ban Pasemas, said Mr Kamarudeng served one year in jail for his involvement in trafficking people from Myanmar. After his release from jail, he was never again involved in illegal activities, Mr Marodee said.

Relatives of Mr Kamarudeng insisted he was innocent and pleaded with authorities for justice. 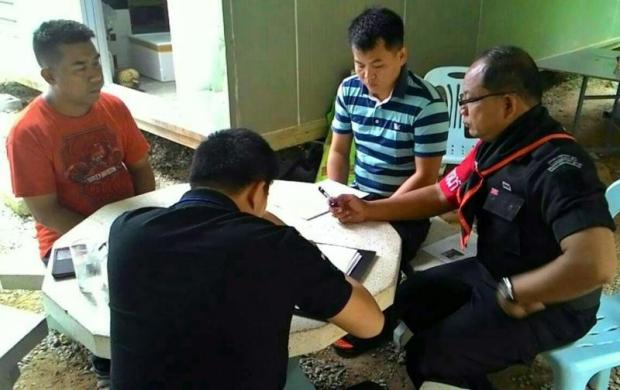 On Thursday, seven gallons of a suspected bomb-making substance were seized at a rented house in Soi Raj Uthit 34 in Min Buri district. The house was allegedly rented by suspect Wanna Suansan. Tests on the substance are currently under way.

The Turkish embassy in Thailand yesterday issued a statement saying it had requested clarification on whether any of the suspects are Turkish. The embassy is understood to still be waiting for an official reply from Thai authorities.

"We are still awaiting a reply regarding the Turkish passports which have appeared in the media," the statement read. "This embassy has still not received any official notification from the Thai authorities concerning any arrest warrants."

Thai authorities said they have informed the embassy that their investigation is ongoing and they have yet to request formal verification of any passports. 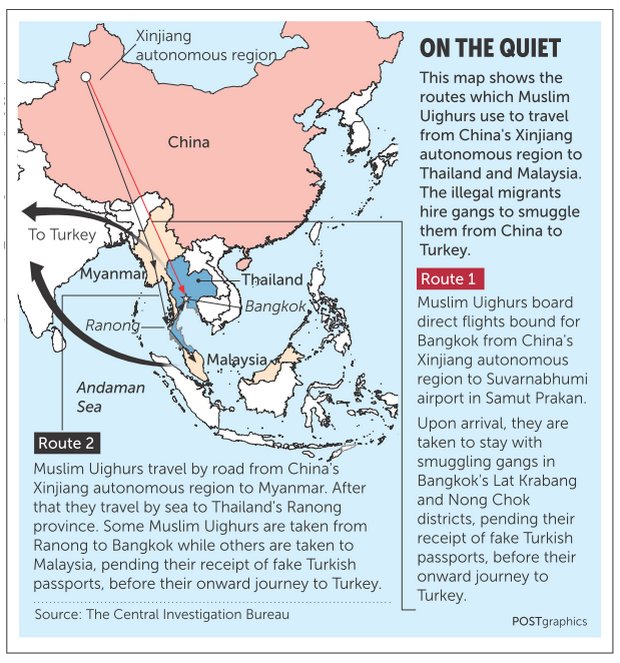