The military hands over bombing suspect Adem Karadag to the Metropolitan Police Bureau on Friday after holding him for seven days. (Photo by Thiti Wannamontha)

DNA tests show a foreign man arrested near the Cambodia border Tuesday is not the yellow-shirted Erawan shrine bomber, but was "definitely involved in the bombing", police said.

Assistant police chief and police spokesman Prawut Thavornsiri told reporters today that DNA samples from Yusufu Mieraili, 25, did not match those found in the suspected bomber's taxi, on a banknote or on shreds of the bomb-containing backpack the suspect handled.

"There's no evidence to confirm he is the yellow-shirted man," Pol Lt Gen Prawut told the media. "However, he is definitely involved with the bombing."

Mieraili's fingerprints matched those collected from a container of explosive material found at an apartment in Nong Chok district and from a nail clipper at a rented apartment in Bangkok's Min Buri district, the spokesman said. 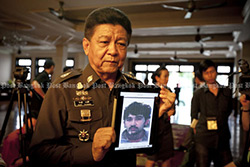 Friday's revelation follows an earlier negative result from DNA testing of Adem Karadag, 28, who was arrested at his northern Bangkok apartment Saturday. Mr Karadag was released from military custody and turned over to police Friday. Pol Lt Gen Prawut told Kyodo he would be brought to the Min Buri Court for committal on Saturday morning.

The ruling-out of the two foreigners in custody means that the man seen wearing a yellow shirt while leaving a rucksack at the Erawan shrine Aug 17 remains at large despite two arrests and the naming of seven other suspects in recent days.

While police at this stage do not believe Mr Mieraili is the bomber, they do think he is instead an accomplice in the attack that left 20 dead and 130 injured. And he did stay at the Maimuna Garden Home apartment in Min Buri, Pol Lt Gen Prawut said.

The spokesman also said the bomb conspirators frequented a rented house on Rat Uthit 34 Road in Min Buri where police found containers of suspicious liquid Thursday night. After initially stating that the liquid kept in 10 containers was an ingredient in bomb-making, authorities backtracked Friday, with Col Winthai Suvaree, spokesman of the National Council for Peace and Order, calling it a precursor for narcotics production.

Deputy government spokesman Werachon Sukondhapatipak speculated that the bombers could have received financial support from a human-trafficking cartel.

"Human traffickers have a completely vested interest and some party lost out when we repatriated Uighur people (to China)," Maj Gen Werachon said, referring to the forced deportation of 109 Uighur Muslims to China in July. The majority of those sent back, handcuffed and blind-folded, with Chinese security forces remain in detention.

Buriram United continued their good run with a 2-0 home win against 10-man Trat in Thai League 1 on Tuesday night.

The Senate has scrapped the selection process of board members at the National Broadcasting and Telecommunications Commission (NBTC) as the amended NBTC law took effect on Tuesday.