The suspect named on a fake Turkish passport as Adem Karadag is escorted to the Min Buri provincial court on Saturday where judges approved his detention. (Photos by Thanarak Khunton)

A court on Saturday approved the detention for 12 days of the first suspect arrested in connection with the Aug 17 Erawan shrine bombing.

Police who brought the suspect to the Min Buri provincial court opposed bail, saying he was a flight risk. The court agreed and the man named on a fake Turkish passport as Adem Karadag was taken to the Min Buri prison in eastern Bangkok.

A suspect can be detained for up to seven 12-day periods, or 84 days in total, before formal charges must be laid.

Police spokesman Prawut Thavornsiri said officers were also seeking an arrest warrant for a 10th suspect, who was a foreigner. He declined to reveal his nationality.

The man known as Adem Karadag was arrested at an apartment in Nong Chok district of Bangkok last Saturday. He is 28 years old but his nationality has still not been confirmed.

Police and soldiers who raided the apartment found bomb-making materials and dozens of fake Turkish passports.

Police tested the man's DNA against samples taken from a taxi, a banknote and shreds of a backpack recovered at the shrine, all of which were believed to come from the man who planted the bomb that killed 20 people. They were not a match but officers believe the suspect had a role in the bombing plot.

The tests also showed no match for Yusufu Mieraili, a 25-year-old man arrested in Sa Kaeo province on Sept 1.

Mr Yusufu's fingerprints, however, matched those collected from a container of explosive materials found at the apartment and from a nail clipper found in a rented room at the Maimuna apartment building in Min Buri.

However, Matichon Online reported that Mr Yusufu, a chemical engineer from a well-known university in China, might have assembled the bomb.

On Aug 17, it said, he was believed to have taken a taxi from Min Buri with the backpack containing the bomb to Hua Lamphong. There, he handed it to the yellow-shirted man who subsequently planted the device.

The report said that both men travelled separately to the shrine. The yellow-shirted man placed the bomb and Mr Yusufu was believed to have detonated it from the skywalk, the report said. 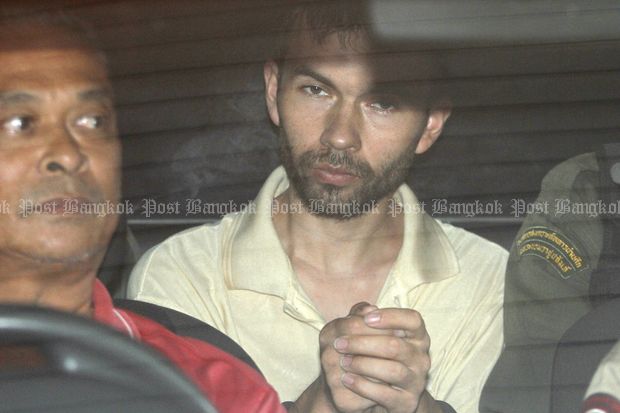 The man known as "Adem Karadag" is photographed in a van as he is brought to the Min Buri court on Saturday.

One of 21 renegade MPs expelled from the ruling Palang Pracharath Party (PPRP) is appealing against the decision, saying he had nothing to do with the moves that led to the group's axeing.

The Ministry of Defence on Saturday assured all political parties will have an equal electioneering opportunity on its premises for the Jan 30 by-election in Bangkok Constituency 9, covering Lak Si and Chatuchak districts.

Thailand coach Miyo Okamoto was left ruing missed opportunities after the Chaba Kaew suffered a 1-0 defeat at the hands of the Philippines in their opening 2022 AFC Women's Asian Cup Group B game in Mumbai, India, on Friday night.