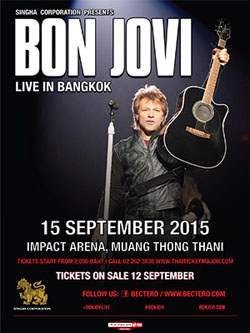 Formed 32 years ago, the multi-award winning veterans were scheduled to perform their first-ever concert in China. But reports suggested the gig was cancelled because of the band's use of Dalai Lama imagery in past shows.

The band announced on their website that they are looking forward to the concert in Bangkok.

“We’ve toured around the world since 1995 and are excited to reunite with our fans in Thailand again! See you Tuesday, September 15,” Jon Bon Jovi said.

The Bangkok Metropolitan Administration is offering testing at home for people who suspect they may have caught the coronavirus disease.

LONDON: Prime Minister Boris Johnson began a third day in intensive care on Wednesday battling the coronavirus, which has struck at the heart of the British government, infected more than 55,000 people across the country and killed nearly 6,200.