A police team has been dispatched to Malaysia to work with authorities there to track down the suspected Erawan shrine bomber.

Deputy national police chief Chakthip Chaijinda, who leads the investigation into the bombings at the shrine and Sathon pier on Aug 17 and 18 respectively, said Thursday he had assigned Pol Lt Gen Suchart Teerasawat, an inspector-general, to go to Malaysia for the mission.

No investigation progress has been reported back so far, Pol Gen Chakthip told the Bangkok Post.

A highly-placed source at the Central Investigation Bureau (CIB) also said Thursday that Pol Lt Gen Suchart travelled to Malaysia three days earlier following the discovery that a bombing suspect had sneaked out of the country through a southern border area in Narathiwat's Sungai Kolok district.

The man was likely to be the yellow-shirted suspect seen planting a backpack believed to contain a bomb at the Erawan shrine shortly before the deadly blast on Aug 17, the source said.

A technical probe into the bombings and testimonies from two detained suspects made police confident that the fleeing man was definitely associated with the bombings, the source said.

He was referring to Adem Karadag and Yusufu Mieraili. Mr Karadag, 28, was arrested in his room at the Pool Anant apartment in Nong Chok district on Aug 29 while Mr Mieraili, 25, was later caught and detained in Sa Kaeo on Sept 1. The two are now being detained at Min Buri prison. Police allege they were involved in the two bombings.

The source said the man suspected of being the yellow-shirted bomber sneaked out of the country with the help of a Sungai Kolok-based trafficking network that smuggled Rohingya to Malaysia.

The source said Pol Lt Gen Suchart was picked for the mission due to his investigation expertise in the southernmost provinces and his close relationships with local Malaysian authorities.

"The work between us and the Malaysian [police] could lead to the arrest of the suspect within one or two days," the source said. 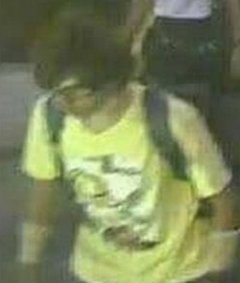 Elusive quarry: Set off the bomb, headed for Malaysia.

Meanwhile, another investigation source said police are probing whether the bombing suspects were financially linked with Abubaka bin Sulaiman, a Malaysian man accused of being involved in online football gambling and drug trafficking. His criminal syndicate in Thailand was busted in 2009 and he has since fled to Malaysia.

As for the ongoing probe into the money trail of the bombing suspects, national police spokesman Prawut Thavornsiri said CCTV footage at a Bangkok Bank branch on Soi Ramkhamhaeng 22 on Aug 5 showed Mr Mieraili came alone to the bank to conduct a transaction.

This differed from the earlier report that Mr Mieraili and suspected bombing mastermind Abudureheman Abudusataer, known as "Ishan", went to the bank together on that day.

Not much money has been wired to the suspect and no information suggested it was transferred from the mastermind of the attack, the spokesman said.

The revelation came one day after Pol Gen Chakthip said police were seeking help from Interpol to hunt Mr Ishan who they believed had fled to Bangladesh.

The suspect was likely to have returned to Turkey, the source said.

A probe is under way to determine whether the money wired from Turkey was used to fund the attacks or the network smuggling Uighurs, the source said.

The detained suspects told investigators a Thai person acted as a coordinator for the group, the source said.

The suspects, according to the source, said they had never met the coordinator but only heard her voice during phone conversations.

The investigators believe the woman was Wanna Suansan, who rented a room at the Maimuna Garden Home apartment in Bangkok's Min Buri district where urea-based fertiliser and other bomb-making material were discovered, the source said.

Pol Lt Gen Prawut said police are gathering evidence to seek an arrest warrant for Mr Ishan, who used to stay in the same apartment with other suspects and that he might have been aware of the attack.

He said Interpol and Bangladeshi authorities had been asked to look for Mr Ishan, but they have yet to produce any information.

He said Mr Mieraili has so far spoken mainly about his role, and has said little about other bombing suspects.

Responding to a media report that Mr Mieraili is part of the separatist network in the Xinjiang region, which is home to ethnic Uighurs, national police chief Somyot Poompunmuang said he was not aware of the report.