The ride of their lives
Thailand
General

The ride of their lives

Living in the community where he works as a motorcycle taxi driver, Nuttapat Boonpong was always concerned about those less privileged than himself, especially the elderly. Though he and his colleagues earn only a minimal wage, they have a unique way to help their neighbours. 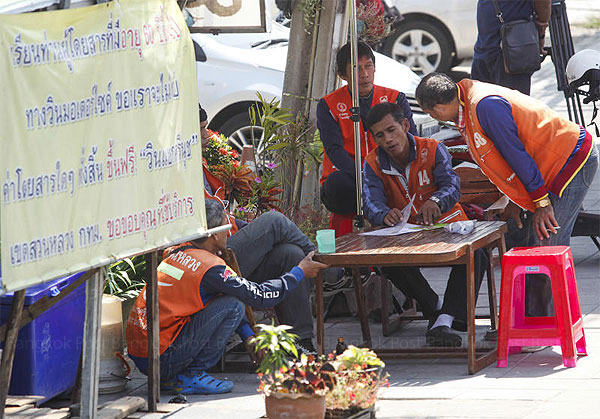 Mr Nuttapat has begged and cajoled his driver friends to provide free lifts to the grandfathers and grandmothers who find it difficult to get around, while also contributing to a fund to help pay for funerals.

“It’s great to be able to help someone else,” said the head of the Srinut motorcycle queue in Soi On Nut 49 in Suan Luang district.

It started about two years when Mr Nuttapat and a group of motorcycle taxi drivers established the queue. He came up with an idea to provide free motorbike taxi services to the elderly after watching them struggle to get around the community on their errands.

Mr Nuttapat floated the idea to other queue members, most of whom were old friends from high school or neighbours in Morawan 1 community.

Some were reluctant to get involved at first, so he offered to take responsibility for the costs of running the free service. He did not want the other members to reject the elderly passengers. Soon after, however, everyone came on board and the free service has now become a valued part of the community.

The 46-year-old said most of the elderly are dependent on others as they have health problems, and the 14 drivers at the queue just want to help them.

To promote the queue’s free service for older folk, Mr Nuttapat used his own money to make a banner and placed it in front of the community.

Initially, the older customers were reluctant to take advantage of it. Mr Nuttapat had to explain the drivers’ willingness to service the “aunties” and “uncles” in the community for free.

“We simply want to do it with all our hearts and do not expect anything in return,” he said. The drivers see these elderly folk as part of their family as they have lived in the community all their lives.

Almost two years after the free service began, none of the drivers have accepted reimbursement of the costs from Mr Nuttapat as there are only 15 to 20 elderly customers who use the free service a day. It doesn’t hurt the pockets of the 14 drivers at the queue as each trip costs only about 10 to 15 baht.

One of the beneficiaries of the service, Wichai Jaow-ngan, said he had to be urged to use the service though he felt bad about getting it free. “Most of the drivers have a family and they live from hand-to-mouth.”

Mr Wichai, who suffers impaired balance and mobility limitations, needs to go to a fresh market a kilometre away from the community alone to buy food several times a week.

The only way to get there is to walk across the flyover to the market on the other side of the road.

The 69-year-old is grateful for the generosity and kindness of the drivers, but regrets that there is nothing he can give them in return. He instead rewards them with good wishes for their good health and fortune.

The drivers say they do not want anything in return. It is enough to hear blessings from the elderly and it makes them proud to be able to contribute to the community. Mr Nuttapat says they always give more than they need to others. “If we don’t have money to give, we help.”

Chaluay Booncheun, 77, another regular customer, said the service allows her to live a more comfortable life. She usually uses the motorbike taxi service to get to a healthcare centre every week to see a doctor.

It is great to know that some people do care for the elderly, Ms Chaluay says.

She is grateful to the queue members for making the elderly visible members of the community, as most older folk are ignored or seen as a burden.

There are some younger people who take advantage of the free service, Mr Nuttapat said, but members nevertheless are enthusiastic about serving them.

Not everyone has a great day every day, he said. Little things can make a big difference for someone who is not having one.

Mr Nuttapat strongly believes in the power of unconditional giving. Doing good deeds is a way to send someone good vibes without expecting anything in return.

For himself, giving adds more meaning to his life, said the father of three-year-old twin sons.

He said giving and helping others has taught him to stop being selfish in pursuit of happiness.

The complementary service has earned the queue members a good reputation for being generous and kind. Word of mouth has bought more customers pouring in to use their services, the queue’s head said. Free food from the locals is passed on to them regularly.

The taxi drivers have now become an inseparable part of Morawan 1 community. The locals often ask them to help their older family members get to various places as they are home alone during the day when the rest of the household is at school or work.

“The locals have faith in us,” Mr Nuttapat said.

Living in the city is not easy for Wittaya Ar-dam, 51, the sole breadwinner of a family of three that includes his 87-year-old mother. The queue member initially disagreed with Mr Nuttapat’s plan because he was worried about the additional petrol costs that would be incurred.

But the condition of his mother made him realise that the elderly need help and he eventually decided to join the charitable project.

To his surprise, the good deed has helped him earn more money, up from 400 to 600 baht each day.

Mr Nuttapat has always striven for a greater effort to help people. He and his queue members are engaged in raising funds for needy people in his community by collecting 100 baht from each driver every month. The money is spent on expenses for funerals in the community.

“We should give what we can. We don’t sit back and wait until we can do everything for everybody — we may end up doing nothing for anybody.” 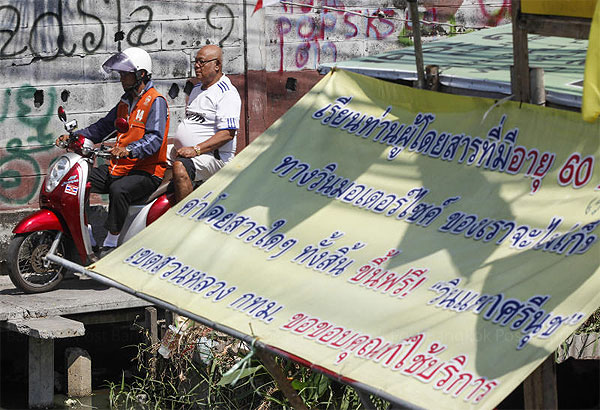 A signboard at an area at Soi On Nut 49 reads: Motorcycle taxi drivers at Srinut queue provide a free-of-charge service to customers who are over 60. photos by Pattarapong Chatpattarasill