The collapse of a 100-metre section of an embankment road along an irrigation canal in Ayutthaya closed the highway. Repairs are underway and officials hope to open the road by the middle of next week. (Photo by Soonthorn Phongpao)

AYUTTHAYA — Part of Highway 3501 in Bang Ban district has been closed for emergency repairs after it collapsed.

A 100-metre section of the embankment road along the Bang Ban irrigation canal in tambon Wat Taku sunk Sunday night, leaving behind a hole about two metres deep. No one was injured when it buckled.

Authorities closed the subsided section to traffic to begin repairs, which are expected to take about 10 days.

Chalartnop Thongthong, deputy chief of the Ayutthaya Highway District, said the embankment road was five metres high and an examination found soil at its base, which was nine metres wide, had shifted, resulting in the roadway's collapse.

Somruam Hiranchai, the tambon Wat Taku chief, said the road used to flood every year and underwent repairs several times. The road's height was raised to make it an embankment road after the 2011 flood disaster. Soil at its base may have softened, caused it to sink.

Transport and highway authorities are inspecting riverfront roads nationwide for risk of subsidence brought on by the drought after several in Ayutthaya and Pathum Thani collapsed over the past few months. 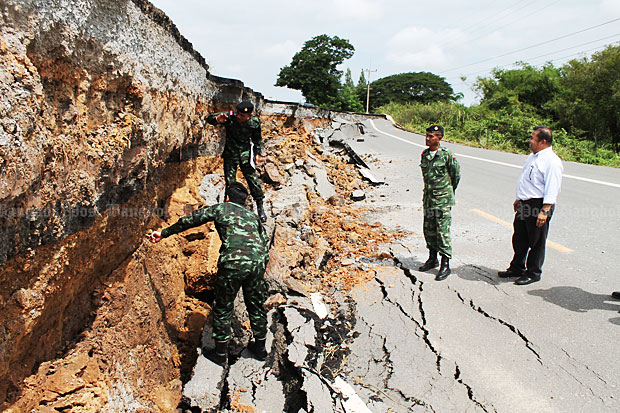 A special budget has been set aside for repairs and reinforcement of roads prone to subsidence.

Sarawut Songsiwilai, deputy director-general of the Department of Highways' road-maintenance division, earlier said the agency supervises more than 60,000 kilometres of roads nationwide and only 5% of those were vulnerable to drought-aggravated subsidence.