Bomb suspect: 'I wasn't even in Thailand'
Thailand
General

Bomb suspect: 'I wasn't even in Thailand'

Family still in the dark about arrest

The family of the first suspect arrested more than three weeks ago over the Erawan Shrine bombing do not know he is in custody in Thailand.

Bilal Mohammed, 30, has prepared a statement through his lawyer Choochart Khanphai to present to the Turkish Embassy to try and gain consular assistance.

In an exclusive interview with the Bangkok Post Sunday, Mr Choochart gave intricate details of Mr Bilal’s case to back up his client’s claim of innocence.

Mr Bilal was arrested at 7am on Aug 29 while staying in room No 412 at the Pool Anant Apartments in Nong Chok. Born in the Xinjiang region in western China, he travelled to Bangkok via Vietnam from Turkey, where his family had relocated more than a decade ago. The room he was arrested in was organised by a people smuggler he identified as Abdullah Abdulrahman.

Mr Choochart intends to submit the plea to the Turkish Embassy within days to ask for Mr Bilal’s family to be informed of his plight. His mother Sefiye Mohammed, 70, older brother Adil, 33, and younger sister Hadiqe, 27, live in Istanbul. Mr Bilal says the family moved to Istanbul from Urumqi, Xinjiang, in 2004. His father died in 1990. The three siblings have Turkish nationality, but their mother does not. 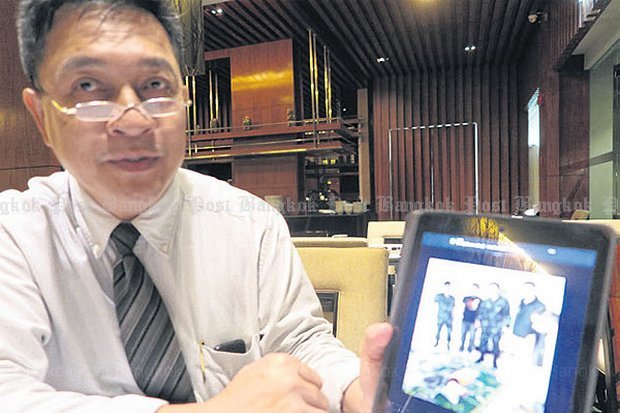 Mr Bilal told Mr Choochart that he and his brother Adil work as truck drivers in Turkey. “He wants me to help coordinate with the embassy to inform his brother about his arrest. He is very concerned about his mother’s health and doesn’t want her to know of his situation at all.”

The statement was put together after a five-hour visit with Mr Bilal on Tuesday at a military camp, during which military personnel and two interpreters were present. Mr Choochart said Mr Bilal speaks reasonable English and he was able to communicate with him in this language.

The statement contains Mr Bilal’s account of travelling from Istanbul before making his way to Bangkok via Vietnam in order to be transported to Malaysia to find work. Mr Bilal was holding a fake Turkish passport during the raid. It was the second fake passport he had used since his departure from Istanbul in mid-April.
“Mr Bilal recalled having prepared US$7,000 [250,000 baht] for the journey, he had savings of US$5,000 and he borrowed US$2,000 from his brother,” said Mr Choochart, who met with Mr Bilal on Sept 11 at Min Buri Prison and on Tuesday at the 11th Army Circle.

“He spent US$1,000 obtaining the first passport there [in Turkey]. As an immigrant, even though with Turkish citizenship, Mr Bilal cannot obtain permission to leave the country until he has stayed in Turkey for 20 years. “Another US$750 was spent to buy a plane ticket to Hanoi. Mr Bilal could not remember the name of the airline. He merely said it was an Arabic airline.”

Mr Bilal was informed in Turkey that upon landing in Hanoi he would be picked up by a man named Abdullah Abdulrahman.

When he arrived in Hanoi, he met with Mr Abdullah, who speaks Turkish, at the airport. He was taken to a hotel “owned by an Arab”. He disposed of his first passport and obtained another one with the name Adem Karadag for US$1,200.

“Mr Bilal didn’t take a direct route to Malaysia because he was told that a fake passport could be spotted easier there than in Vietnam,” Mr Choochart said.

Mr Bilal stayed in Hanoi for three months. In mid-July he travelled to Laos with Mr Abdullah. They spent another 35 days there before making their way to the Thai-Laos border on Aug 21, four days after the Erawan Shrine bombing which killed 20 people.

Mr Abdullah explained the lengthy stays in each location were due to waiting for an earlier “group of people” to move on before Mr Bilal could follow the same route.

Mr Bilal remembers arriving at the Laos immigration about 10am, before reaching the Thai immigration. Mr Choochart said, “He paid US$600 for passing each border point.” 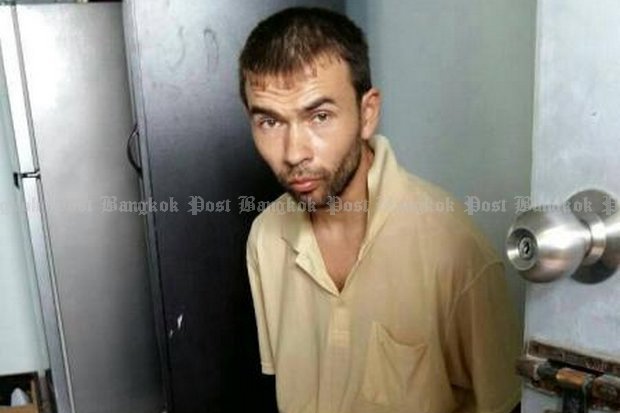 Bilal Mohammed, on the day of his arrest. He has told his lawyer he did not arrive in Thailand, with a human trafficker trying to get to Malaysia, until after the Aug 17 bombing. (Bangkok Post file photo)

At both immigration points, Mr Bilal said Mr Abdullah seemed familiar with the officers and was joking and smiling with them.

Throughout the journey, Mr Abdullah held his passport. Mr Bilal couldn’t say whether or not it was stamped. Police have not yet revealed the border point where the passport in the name Adem Karadag was used to enter Thailand or the date it was used.

As they passed the immigration point into Thailand, a small car was waiting with a Thai driver to take them to Bangkok. Upon arrival in Bangkok between 4pm and 5pm, Mr Bilal and Mr Abdullah changed to a green and yellow taxi, whose driver spoke English with Mr Abdullah. He took them to the Pool Anant Apartments.

Mr Bilal stayed in room 412 and Abdullah in room 414. Mr Bilal says he never entered room 414. Mr Abdullah bought him food, which included beef, oil and apples which he cooked in the room. When he discussed his travel plans with Mr Abdullah it was on the balcony outside the rooms.

Mr Abdullah exchanged Mr Bilal’s money for him. On the day of the police raid he had 11,000 baht, 200 ringgit and US$400. During their stay, Mr Abdullah assured Mr Bilal that there were many who had stayed in his room before and all had successfully made their way to Malaysia.

On Aug 24, Mr Abdullah handed over a fake passport, saying that Mr Bilal should prepare for the trip to Malaysia. On Aug 25 or 26, Mr Abdullah called Mr Bilal on a phone the smuggler had bought for him and said he should be ready to travel. He never saw or heard from Mr Abdullah again. Police have issued an arrest warrant for a Mr Abdullah.

On the day of the raid, Mr Bilal said he was preparing breakfast, after washing and airing his clothes. It was his eighth day in Bangkok, after arriving on the 21st, and he had never been outside the condo building.

As Mr Bilal opened the door to see what the commotion outside was, he was shoved out of the room and several uniformed men stormed in and searched the premises.

The room was sparse. Mr Bilal said he slept on a green carpet, which was used as a bed at night and a prayer mat by day. The carpet was later photographed by police with items in plastic bags found in the room, including the clothes he aired in the morning. He maintains that every item in the plastic bags - including screwdrivers, scissors and batteries - were scattered in drawers or shelves before he arrived. He denies ever seeing other items, such as ball bearings and steel pipes, which were shown in police photographs after the raid.

The clothes he wore that day, a yellow shirt and cream-coloured pants, were in the room before his arrival. He wore them as he waited for his own clothes to dry.

Mr Bilal denies any involvement or awareness of bomb-making materials and procedures. Mr Choochart said Mr Bilal only “wants to find work as a driver or furniture-maker in Malaysia because he has seen many earn money after travelling from Turkey to work there”.

Mr Bilal has confessed to possession of a fake passport and illegal entry. Mr Choochart said he could face a four-year jail term for the two charges.

Mr Choochart said his involvement with Turkish business people in Bangkok led him to represent Mr Bilal, as the news of the fake Turkish passport was raising concerns among Turkish nationals. According to Mr Choochart, Mr Bilal can be detained while awaiting the case to be filed with a court for seven 12-day periods, or 84 days in total. 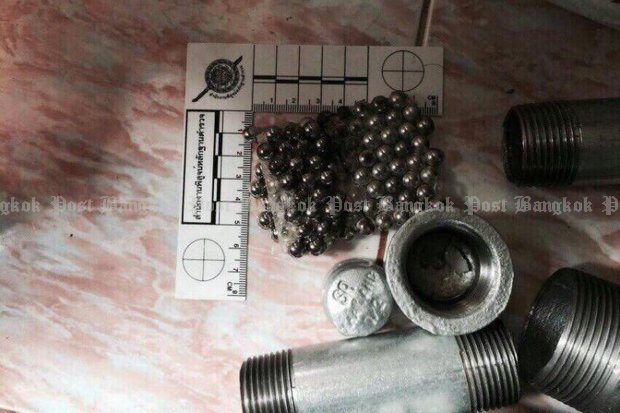 The "bomb making components" that police say they found in the apartment with Mr Bilal. He says he never saw them until police showed them at the time of his arrest. (Bangkok Post file photo)