In the wake of military detention and his controversial departure from 'The Nation', outspoken reporter Pravit Rojanaphruk says he still feels a duty to make society more equitable, democratic and free.

Veteran journalist Pravit Rojanaphruk’s social media comments on democracy were seen by the military junta as a threat when they took him blindfolded to a detention camp last Sunday for "attitude adjustment".

“One military officer called me an 'influential thinker,' ” the 47-year-old said.

Upon being released on Tuesday, he told his 25,000 Twitter followers that his ideology was intact, but has since toned down his daily comments on Facebook and Twitter.

A day later, he resigned from The Nation under what he says was pressure from the newspaper, after working there for 24 years.

Since last year’s military coup, which received strong support from the elite, Pravit has been highly critical of the limited freedom under the ruling junta.

Pravit himself was born to a well-off family. A 300km road stretching from Suphan Buri province to the border of Cambodia bears his mother’s maiden name Suvarnasara, which was granted by King Rama VI in 1915.

His father was a former Thai ambassador to the Philippines and later to the USSR, as well as a former director-general of the Treaties and Legal Affairs Department at the Foreign Ministry.

Pravit spent several years of his childhood in Brussels before returning to Bangkok to study at Saint Gabriel’s College. He continued his high school studies in Manila at San Augustine College, an elite Catholic boarding school, and completed his bachelor's degree in community development and social work at the University of the Philippines.

“Precisely because I had a privileged upbringing, I feel a sense of responsibility to make society more equitable, democratic and free,” Pravit told Bangkok Post Sunday.

His political views began to change when he started work at the features section of The Nation in 1992, where he would focus on social problems, lives of the poor and class disparity. That the grassroots struggle contained a form of political negotiation caused  Pravit to see politics as freedom of expression and cultivating a democratic culture as opposed to the narrow view of party politics and elections.

He was named an outstanding journalist by the Sathirakoses-Nagapradipa Foundation in 1994, and later published Wishes and Lies: Feature Stories from Thailand.

After receiving a British Chevening Scholarship to study a master's degree in social anthropology at Oxford University in 2001, he returned to The Nation to report on politics, which he initially detested.

“I never wanted to write about politics because I’ve always thought it’s a kind of opera where people make-believe,” he said.

Instead of focusing on political parties, he would often write about human rights, democracy and public participation. He criticised former prime minister Thaksin Shinawatra’s war on drugs and the Tak Bai incident, as well as Yingluck Shinawatra’s blanket amnesty bill. 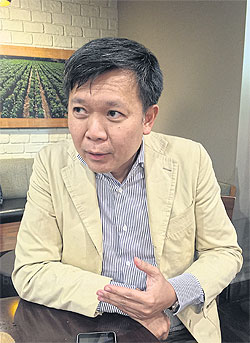 freedom fighter: Pravit Rojanaphruk wants to maintain a fair level of expression under the military regime.

“I was never a fan of Thaksin, but we need to respect the voices of the majority. We need to fight by the rules, not roll out tanks,” said Pravit, referring to the ex-premier’s election victories and ultimate deposition.

“People like to see me as a red shirt [those who support Thaksin] because I am against the coup. It’s binary thinking: Black and white, no shades of grey.”

Pravit’s popularity as a champion of democracy and freedom of expression soared when he opened a Twitter account in 2012 at the request of The Nation, initially to report on that year’s election results.

“The NCPO [National Council for Peace and Order] sees my tweets as going viral. They were very inclusive and catchy. Thais are sensitive towards things that are catchy,” he said.

The Nation published an open letter in support of Pravit after he was summoned last Sunday by the junta for the second time following the coup. But a large group of employees wanted the newspaper's management to adjust their role in dealing with Pravit.

Nation TV news anchor Kanok Ratwongsakul wrote on his Facebook page that most employees disagreed and were displeased with Pravit’s opinions. But while many colleagues view him as an aggressive man with radical views, his departure is seen as a loss for the company by those who respect his uncompromising stance.

On Wednesday, a day after his release from detention, Pravit was asked to have a one-on-one meeting with The Nation president Pana Janviroj.

“Mr Pana told me that if I left, it would help lessen the pressure from all sides,” Pravit said. “I left, reluctantly, in order to spare this battle.”

Mr Pana refused to disclose details of the meeting, saying only that what has happened was mutual on both sides.

“The Nation's editorial position is not affected or changed in any way,” he told Bangkok Post Sunday.

The Thai Journalists Association, which also published a letter in support of Pravit during his detention, cautioned journalists to express balanced views on society and politics through social media.

“If the management put pressure on Mr Pravit to leave, I don’t think it’s fair because it’s considered freedom of expression, and it is clear that The Nation promotes the use of social media among their journalists,” said TJA vice-president Manop Thip-Osod, also a Bangkok Post reporter.

“But doing so [expressing views on social media] needs to be within the guidelines of the company.”

At the military detention camp, Pravit was interrogated about his political views, involvement with political groups and human rights advocacy agencies, and his reason for opposing the controversial lese majeste law.

The military filed a charge against him and would press ahead with the charge if he violated NCPO orders.

Since then, he has been invited to speak with ambassadors and senior diplomats from the UK, EU, US, Germany and Canada.

“They wanted to know what happened while I was in detention, and they want to raise these issues with the Thai government,” he said.

Pravit still wants to continue his role as a journalist: He has had a job offer from an international newspaper as a contributor for commentaries.

His mission: To maintain a decent level of freedom of expression under the military regime.

“If others are willing to toe the line, a few of us who are capable of doing something should do something about it,” he said.

Without this freedom to criticise discuss ideas openly, he added, Thai society will be condemned to a future of oppression and mediocrity.

"Press freedom and freedom of expression are essential not only because we are told it's important but because it makes us a more complete human, as it allows us space to debate and deliberate and to be free. Humans cannot fully realise their potential if they cannot speak without fear," Pravit said.

"Freedom to speak our minds is what makes us fully human."