Police turn sights back to Karadag

Security officers have found new evidence leading them to turn their focus back to the detained suspect Bilal Turk, also known as Adem Karadag, as he could be the Erawan shrine bomber.

Mr Karadag was arrested on Aug 29 at a room in the Pool Anant apartment in Nong Chok district of the capital where authorities discovered bomb-making material.

Authorities had earlier believed he had only stored the material in the room.

But according to the latest evidence and investigation, authorities suspect he might be the perpetrator of the Erawan shrine blast on Aug 17 which killed 20 people and injured 130 others, security sources said.

Some of the evidence comes from CCTV footage shot in Lumpini Park showing a yellow-shirted man suspected of planting the deadly bomb at the shrine going into a toilet in the park, where he changed his shirt to a grey one.

The man seen in the footage leaving the toilet resembles Mr Karadag, the sources said.

After leaving the park, he took a public bus to the apartment in Nong Chok.

Mr Karadag has a long scar on his arm, while the yellow-shirted suspect seen in the footage had straps around both of his arms, the source added.

According to the sources, the new evidence was shown to Mr Karadag who is now in custody at the 11th Army Circle, and he allegedly admitted to being the yellow-shirted suspect who disguised himself, wearing a wig and glasses.

However, the investigation is ongoing to verify if he really is the bomber, the sources said.

The information about the investigation of Mr Karadag was unveiled while Malaysian police announced Wednesday the arrest of eight people who they suspect are tied to the Bangkok bombings. 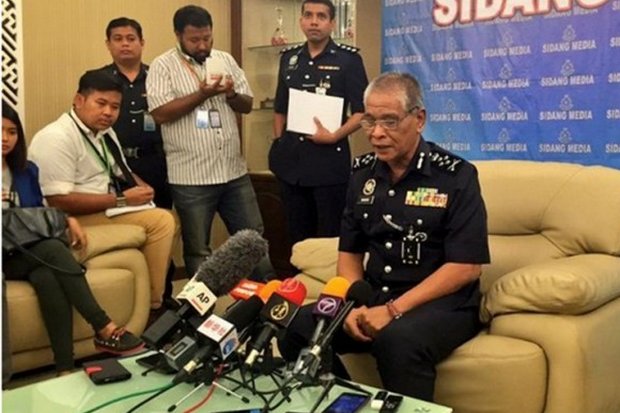 Four were Malaysians suspected of smuggling in foreign nationals from Thailand to Malaysia, believed to have been connected with the blasts, deputy inspector-general of police Noor Rashid Rahim told the media.

"Four of the eight are foreigners -- I believe Uighurs -- and they have been detained, but we haven't been able to verify if they are linked to the events in Thailand, as there haven't been any confessions," said Mr Rahim.

He said Thai authorities were informed about the arrests.

Thai national police chief Somyot Poompunmuang said at this stage it cannot be determined if the suspects were connected with the shrine blast and the Sathon pier explosion a day later.

He said deputy national police chief Chakthip Chaijinda was in Malaysia to consult with Malaysian authorities on how both sides can work together on the case.

Pol Gen Chakthip went to Kuala Lumpur on Tuesday following reports that Malaysian Special Branch police raided several apartments and rented rooms in the capital on Saturday night and detained a suspect who looks like the yellow-shirted bomber, a police source said.

Also Wednesday, a new arrest warrant for a man believed to be connected with the bombing network was approved.

The suspect, whose nationality was not identified, was about 30 years old and 170 centimetres tall and the warrant for his arrest was issued together with a photo of him taken from CCTV footage and his identikit image, said Metropolitan Police Bureau chief Srivara Rangsipramanakul.

He is charged with possessing explosive materials.

An investigation found he bought bomb-making materials at a shop in Soi Sukhumvit 44/2 in Klong Toey district on Aug 4.

A bespectacled man wearing a blue and black striped polo shirt and jeans entered the shop around 3pm, according to the footage from the CCTV cameras installed there.

He bought more than 10 sets of steel pipes and asked the staff to make threads at the top and bottom ends of them. He spent about one hour at the shop.

"The suspect is believed to be Thai as he can speak Thai, and a probe is under way to determine who he is," Pol Lt Gen Srivara said.

Two of them -- Mr Karadag and Yusufu Mieraili -- have been arrested. Mr Mieraili, 25, was apprehended, according to the Thai military, in Sa Kaeo on Sept 1. He allegedly admitted to delivering a bomb-laden rucksack to the yellow-shirted suspect. 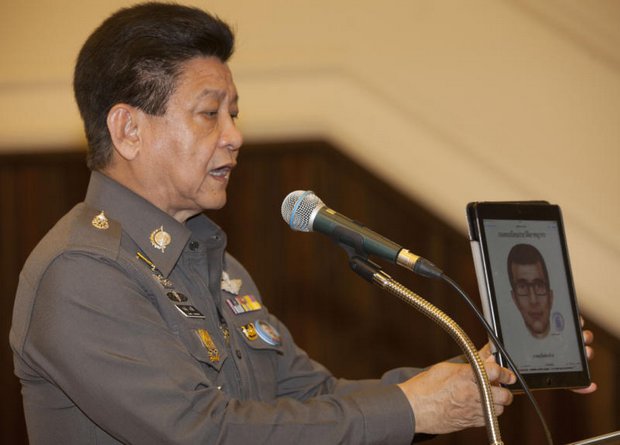 Legislature gets its very own postmark