Police chief Somyot Poompunmuang stands firm in his belief that detained suspect Adem Karadag is the man in yellow who bombed the Erawan shrine in Bangkok in August.

He told reporters on Friday that although police do not yet have solid evidence to substantiate the charge, he personally thought Mr Karadag looked very much like the man in the yellow T-shirt filmed by surveillance cameras who is believed to have placed the bomb at the shrine

The chief said he had been confident Mr Karadag is the bomber ever since he was arrested.

The 28-year-old man, also known as Bilal Turk, was arrested at his rented room at Pool Anant apartment building in Bangkok's outlying Nong Chok district on Aug 29. Bomb-making materials were found in the room, along with many forged Turkish passports. 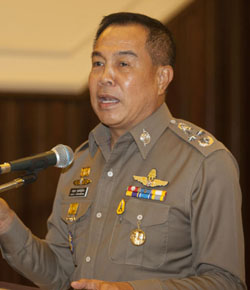 Mr Karadag and another bombing suspect, Mieraili Yusufu, are being detained at the army's 11th Military Circle barracks in Bangkok. Mr Karadag's lawyer earlier said his client was born in China but migrated to Turkey in 2004 with his family.

Pol Gen Somyot said that both suspects were interrogated at the 11th Military Circle on Thursday, and the evidence police had to hand prompted them to confess.

The evidence included a photo of a man wearing a grey shirt at a toilet in Lumpini Park, not too far from the bombed Hindu shrine.

The man in yellow was believed to have changed his clothing in the toilet. Police believed the grey-shirted man was Mr Karadag. Police also found a similar grey shirt in his rented room at the apartment building, Pol Gen Somyot said.

However, police needed more evidence to prove that Mr Karadag was the yellow-shirted man, because any suspect could change his testimony when in the courtroom, the police chief said.

He added that Mr Yusufu's answers were very useful, but he declined to elaborate.

One key witness was reluctant to give information to police because he was afraid of being charged with human trafficking, Pol Gen Somyot said.

The shrine bomb killed 20 people -- 14 Chinese tourists and six Thai nationals, three of them ethnic Chinese --  and injured 130 others on Aug 17.  Another bomb exploded at Bangkok's Sathon pier the following day, but caused no casualties or damage.