A 61-year-old Hungarian woman was killed and 22 other foreign passengers injured when a tourist boat they were travelling on was hit by a boat in the Mae Klong River near a popular floating market in Samut Songkhram’s Amphawa district on Friday night.

The 30-seat boat, Por Chokyothin, was carrying 23 tourists to view fireflies at night along the river when another passenger boat, Sor Sakcharoenporn, with no passenger on board crashed into it in front of Wat Bang Khae Yai in tambon Kwai Om, said Pol Maj Wattana Nuansridam, a duty officer at Amphawa police station, who was alerted around 8pm on Friday.

The crash took place about 500 metres away from the popular Amphawa Floating Market.

The impact of the crash threw all passengers, including 21 South Korean tourists and two other Hungarian nationals, out of the boat. They were drifting in the river with all wearing life jacket vests. Local residents witnessing the incident rushed to help them and alerted police, Thai media reported on Saturday. 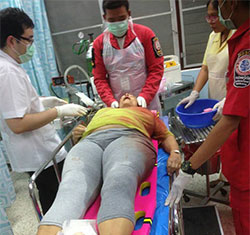 All 23 tourists were retrieved from the river and all sustained injuries, but four of them were seriously hurt. They were all sent to nearby hospitals.

One of the injured was pronounced dead shortly later. The dead tourist was a 61-year-old Hungarian woman, who sustained serious head injuries from the crash.

A police investigation found that the Chok Yothin boat took the tourists from the Amphawa Floating Market to view sparking fireflies in the river.

Police believed that the boat driver might have turned off the lights so the tourists could clearly view fireflies in the dark night. The empty boat might not have seen the tourist boat when it crashed into it.

Investigators would summon the drivers of the two boats who vanished after the crash for questioning to find out the exact cause of the crash.