Police chief Somyut Poompunmuang (left) speaks at the briefing on the progress of the Erawan shrine and Sathorn pier bombings at the Royal Thai Police headquarters in Bangkok on Monday. (Photos by Apichart Jinakul)

Police said the Erawan shrine and Sathon pier bombings might have also been politically motivated as one of the two Thai suspects had been involved in the Nonthaburi apartment bombing in 2010.

But the main motive of the Aug 17-18 bombings was revenge by human traffickers, especially of Uighurs, whose business had been destroyed by a heavy crackdown, police said at a briefing on Monday afternoon.

"We have yet to establish these [political] links. It might have been a contract crime. A group might have hired another already bent on taking revenge to commit the crime so both got what they wanted," said police chief Pol Gen Somyot Poompunmuang. 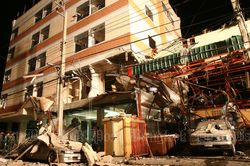 The Samarn Metta mansion after a bomb went off on Oct 5, 2010. (Bangkok Post file photo)

He added the Samarn Metta Mansion blast had been politically motivated.

On Oct 5, 2010, four months after the red-shirt crackdown at Ratchaprasong, a bomb went off at Samarn Metta Mansion in Bang Bua Thong district, killing four, including Samai Wongsuwan, a red-shirt believed to have been making the bombs.

In the room, police found C4 and TNT bombs they believe would have been used to create unrest in Bangkok at the time. The cause of the explosion was later established as an accident caused by amateur bomb-making.

In March 2014, two men on a motorcycle were blown to pieces on Soi Rat-uthit in Bangkok's Min Buri district. They were allegedly carrying pipe bombs which accidentally went off. Police found five more pipe bombs in their house.

At the briefing on Monday, police said Odd Prayoonwong or Yongyuth Pobkaew was the other Thai under arrest warrant in connection with the Aug 17-18 bombings.

Mr Odd, with records of violating an emergency decree, drug abuse and gambling, was allegedly involved in the 2014 Min Buri bombing. His gang was also linked to the Samarn Metta Mansion bombing.

Some evidence in the August bombing linked back to him, said Metropolitan Police Bureau chief Lt Gen Srivara Rangsipramanakul.

He added Mr Odd had allegedly procured equipment and materials for the bombers.

Summarising the case, Pol Chayapol Chatchaidej said the Erawan bombing killed 20 people and injured 100. Of the 17 arrest warrants issued to date and 20 people involved, two have been in custody.

The evidence collected at the scene consists of pieces of the bomb-filled rucksack, ball bearing parts, pipes and others. 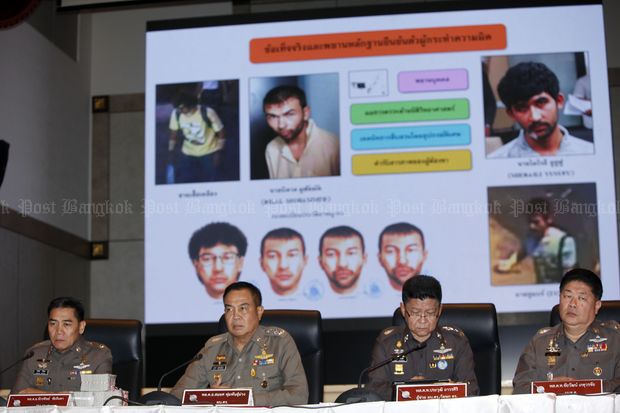 The projection screen shows Mr Mohammed (left) as the yellow-shirted bomber. On screen to the right is Yusufu Mieraili, suspected of having detonated the Erawan shrine bomb.

A day later, a bomb went off after it was thrown into a river near Sathon pier. This time, police found detonation caps and identified a blue-shirted man as the bomber.

After questioning witnesses at the apartment, police found several more people were involved, including Wanna Suansant, the other Thai suspect who had rented the searched rooms there.

Last week, Mr Mohammed or Karadag confessed to being the yellow-shirted man or bomber.

"We insist his confession was not coerced. He voluntarily confessed after seeing the evidence we found," Pol Gen Somyot said. 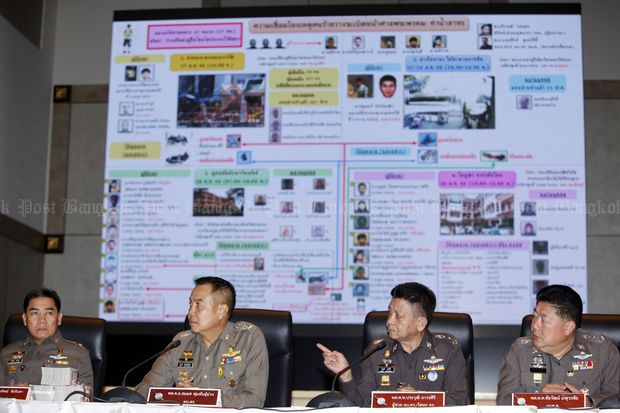 The chart of how all the suspects are allegedly linked is shown on the screen.

Former world number one Carolina Marin breezed into the final of the Thailand Open badminton tournament on Saturday, beating South Korea’s An Se-young 21-19, 21-15.