A man convicted of murdering the Yasothon governor in 2001 has been released on parole after serving 14 years in jail.

Maj Chalermchai Matchaklam, 62, was released early for good behaviour and because he has been imprisoned for more than two thirds of his jail term, Bang Kwang Central Prison chief Suraphon Kaeopharadai said on Friday. 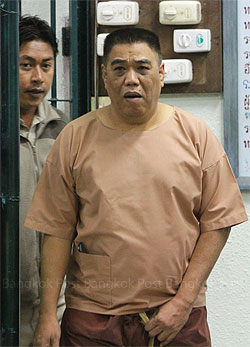 The convict, known as Phu Phan Tueng, was in jail for 14 out of the 17 years and 24 days he was sentenced to for the murder.

His term was commuted from a death sentence, Mr Suraphon said.

In 2006, the Supreme Court upheld rulings from the primary and appeal courts which imposed the harshest penalty on Maj Chalermchai.

Maj Chalermchai, together with two accomplices, denied the charge.

Maj Chalermchai was later given four royal pardons, changing his death sentence to life and then to less than 18 years.

Mr Suraphon said the major is still required to report to probation officers in Nonthaburi during the remaining period of his sentence.

Officials will also monitor his behaviour outside of prison, Mr Suraphon said.

Yasothon governor, Preena Leepattanapan, was found dead in his room at the Royal Pacific Hotel on Rama IX Road in Bangkok on March 5, 2001.

Maj Chalermchai and his two accomplices stayed in two rooms at the hotel during the same period of the governor’s death.

Preena’s blood was found in the drains of the three rooms and on the brake pedal of Maj Chalermchai’s car, according to the murder investigation.