Floods in 11 locations in Bangkok

Motorists and people wade through floodwater on Ratchaphisek Road near the Lat Phrao-Ratchada intersection in Bangkok on Saturday morning. All the floodwater in the area was drained at around 1pm. (Photos by Thanarak Khunton)

Heavy rain continued in Bangkok on Saturday morning, causing flooding at 11 locations, while 32 provinces across the country are on full alert for heavy rain, possible flash floods, forest runoff and landslides in risk areas from tomorrow to Tuesday.

BMA workers are racing against time to drain floodwater from the affected area.

At 1pm on Saturday, the BMA tweeted floodwater has been cleared in all sections of Ratchaphisek Road.

Disaster Prevention and Mitigation Department director-general Chatchai Promlert also said on Saturday that the department has coordinated with 32 provinces in the North, Northeast, the East and the South to put in place measures to deal with heavy downpours triggered by tropical storm Mujigae.

Mr Chatchai said he has asked provincial disaster prevention and mitigation offices in those provinces to closely monitor the weather around the clock during this period. Rapid deployment teams and necessary equipment are on standby to help affected residents as heavy downpours may possibly cause flooding, runoff and landslides, particularly in risk areas, he added

Four are in the East — Chon Buri, Rayong, Chanthaburi and Trat. The remaining five are in the South — Ranong, Phangna, Phuket, Krabi and Trang.

Meanwhile, the Meteorological Department said on Saturday tropical storm Mujigae, which was over the South China Sea, was moving west-northwest at 18 km/h.

It was forecast to move across Hainan Island and make landfall in upper Vietnam on either Sunday or Monday.

Thailand will be affected by the storm from Sunday to Tuesday, said the department. 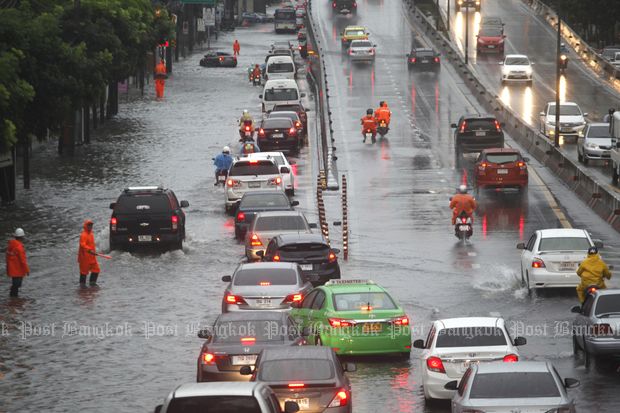 Traffic slows to a crawl on Ratchada Road Saturday morning. 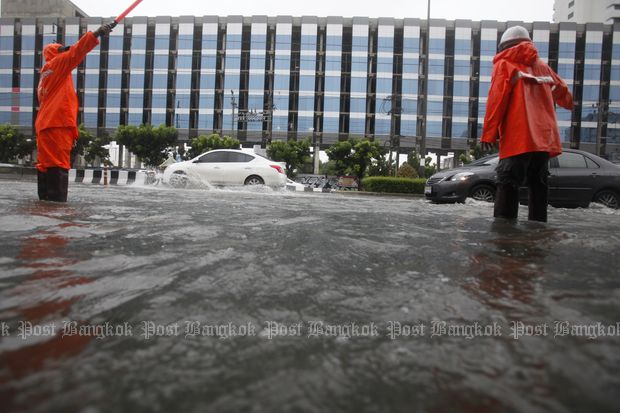 Croatia moved into the World Cup quarterfinals by beating Japan in a penalty shootout on Monday at Al Wakrah, Qatar.