Local officials and soldiers in Chai Nat inspect a major crocodile farm in Wat Sing district as part of precaution measures to prevent a recurrence of crocodiles on the run in Ratchaburi. (Photo by Chudate Seehawong)

Pig farmers raising crocodiles as a sideline in Ratchaburi’s Pak Tho district have been given one week to improve the reptiles' pits to prevent them escaping, or lose their licences.

The order was issued after several young crocodiles escaped from a farm in Pak Tho following heavy rain on Sunday.

Provincial authorities on Tuesday called a meeting with the operators of 31 pig farms to discuss the problem.

Many pig farmers in the area raise crocodiles as a legal sideline, feeding them dead, diseased or unmarketable swine and then selling the reptiles' skins and some meat.

According to a Channel 7 report, several pig farms in Ratchaburi also illegally raise crocodiles without a licence.

Ratchaburi deputy governor Ronnnapop Luengpairoj said he had instructed the pig raisers to improve their crocodile pits to ensure they meet safety standards before teams of officials inspect the pits on Oct 12.

Authorities would revoke the operating licences of farms where the crocodile enclosures are found to be not up to standard, Mr Ronnapop.

Chanin Saengrungruang, Ratchaburi fisheries chief, advised farm owners to cover the pits with steel grates. Standard pits for crocodiles must be 2.50 metres high, while pits for baby crocs must have shade  nets to protect them being taken by birds.

Any farm operators wanting to raise or move crocodiles must first seek permission from authorities, he said. They must also report the number of crocodiles being raised on their property, reptile deaths or transfers. 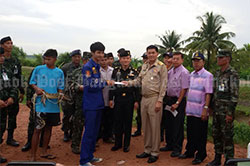 Authorities give a cash reward to a team of volunteers for catching four baby crocodiles which are among several crocs on loose from a farm in Ratchaburi. (Photo by Saichon Srinuanchan)

On Sunday, several baby crocs escaped from Thep Nimit farm at Bor Kradarn sub-district of Pak Tho, causing a panic among local residents who feared they would grow and become dangerous.

Ooy Chinpinkiew, the owner of Thep Nimit, said her farm had three pits, two for adult crocodiles and the other for immature crocs, and each had about 150 of the reptiles.

Continuous rainfall since Saturday had raised water levels in the pits and workers had opened drains to draw off the water into a canal behind the farm. Some of the young crocodiles slipped into the waterway through the pipes during the process.

She said the locals had shot and killed four of the escaped young crocodiles and eaten the meat.

Ratchaburi governor Surapon Sawaengsak on Tuesday handed over a cash reward to volunteers and local residents for helping arrest the fleeing reptiles, which were found in the canal behind Thep Nimit farm. They had been trapped after water was drained from the canal, said Mr Surapon.

The hunt continued for the two remaining fugitive crocodiles.

Authorities on Tuesday also inspected a major crocodile farm in Chai Nat’s Wang Sing district, to ensure there was no replay of the escape in Ratchaburi.

They instructed farm owner Natthawut Imwutthikul to increase safety measures at the farm to prevent his reptiles from escaping.