Police admitted on Friday the bullet that injured a teenage girl on a moving car in Bangkok's Bang Chan area on Wednesday night might have come from one of their own.

Deputy police chief Pongsapat Pongcharoen and acting Bangkok police chief Sanit Mahathaworn held a press conference on Friday with five anti-narcotics detectives at the Metropolitan Police Bureau on Friday following reports a student had been shot in her mother's car on Wednesday.

Pol Gen Pongsapat said the five detectives were on a sting operation to buy drugs from dealer suspects in the district on Wednesday.

Pol Capt Vichakorn Boonsiri, deputy inspector of Rom Klao police station, said the suspects, who came on a motorcycle, knew they were police. As the rider passed on a pistol to his pillion rider, one of the detectives fired a shot at them in self defence, he said.

During that time, Arnatta Songrat, 16, was shot on the front passenger seat of the Mitsubishi sedan that her mother was driving on Suan Siam Road.

She reportedly got off the car and ran across the street to Nopparatrajathanee Hospital on the opposite side but collapsed on the footpath in front of the hospital.

One of the detectives, Pol L/C Ponnathorn Chaiyatham of the Nimitmai police station, said at the briefing he did not know someone was hit until the following day. To show his sincerity, he handed his gun to his superior and was brought to the press conference to tell his story.

Pol Maj Gen Sanit said the detectives would be interrogated and every party would be treated fairly.

Police are waiting for the bullet to be retrieved from Ms Arnatta's body so they can determine whether it matches Pol L/C Ponnathorn's gun, he said, adding in the meantime the detective had not yet been charged.

Doctors will wait a week for the girl to regain her strength before removing the bullet. It had pierced her collarbone and lung and caused severe bleeding.

Visiting the girl at Nopparatrajathanee Hospital later Friday, the police officers apologised to the girl and her mother Thitiya Songrat and promised compensation and rehabilitation.

The 48-year-old mother thanked the police delegation and said that she was still too worried about her daughter to think about anything including legal action.

Dr Uthai Tanslaruk, director of Nopparatrajathanee Hospital, said the girl was recovering as her lung was bleeding less and she was mentally strong.

Pol Maj Sanit said Pol L/C Ponnathorn personally apologised to the girl. She forgave him and even teased him he should practise more to improve his shooting accuracy.

Pol L/C Ponnathorn later said one of the suspects had shot at him first, so he had to fire back in self defence. 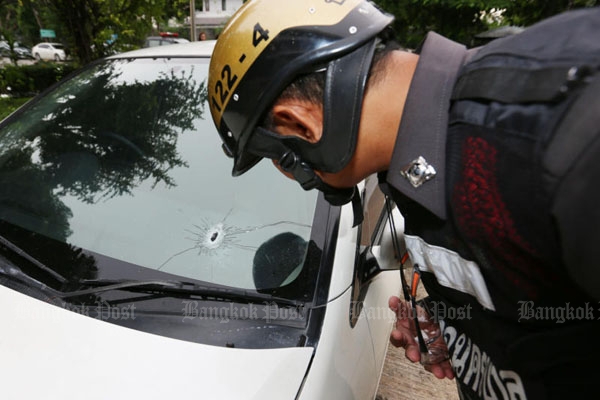 A police officer inspects the bullet hole on the girl's sedan. (Photo by Pattanapong Hirunard)