Crocodiles wait to be fed at the Sri Ayutthaya Crocodile Farm in this 2014 file photo. New rules would require farms to have pit walls at least 1.5 meters high, along with other safeguards to prevent escapes.

Crocodile farms will need walls at least 1.5 metres high around their pits under planned government guidelines, an official said Friday, after 28 crocodiles escaped in early October.

There were previously no specific rules for the design of the pits, with the Department of Fisheries saying only that they should be "sturdy and strong."

The new guidelines would set the minimum height of the walls around the pits at 1.5 metres, with an extra section going a half-metre underground for pits built into the earth rather than concrete, to avoid crocodiles digging under them.

"We will send these guidelines to all provincial departments," the department's Yooey Ketpetch said. "We hope that they will prevent future escapes."

Over the past three months at least 35 crocodiles have escaped in two separate incidents, including 28 that escaped in Ratchaburi province this month alone. All were captured or killed within a few days.

At least five escaped in 2014 from four different locations. In 2011, severe flooding in central Thailand set loose more than 100 crocodiles. Some escaped with the help of flood waters, but many got out on their own.

"Authorities and crocodile farms should make sure that there are no future escapes," said Supanida Rangsriseneepitak, a native of Ratchaburi, home to a floating market popular with locals and tourists. "I want to have peace of mind when I go near the water without having to worry that some crocodile may attack me."

Chanin Sangrungrueng of the Ratchaburi Fisheries Department, noted that there currently are no specific rules governing farm construction.

"Because the rule is not specific enough, pits are built without any standards," said.  "We need new rules to prevent the escapes." 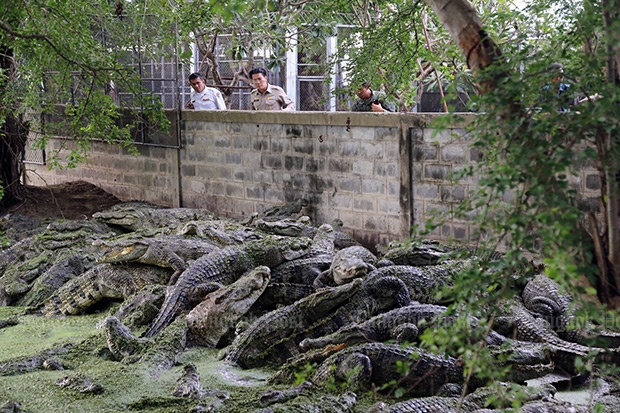 Authorities inspect a pit at the Wasant crocodile farm in the Wat Sing district of Chainat where some reptiles escaped earlier this month. (Bangkok Post photo)

In addition to walls at least 1.2 metres tall, metal grates are needed over pit corners, the fisheries expert explained. When crocodiles are alarmed, for example by thunder or other loud noises, they tend to gather in a pile in the corner, allowing the ones on top to climb out.

But Uthen Youngprapakorn, owner of the Samut Prakan Crocodile Farm and Zoo which houses 60,000 crocs, argues that new rules alone may not be enough.

"Many incidents happen due to human error," Mr Uthen said. "The most recent escape happened because the farm operator forgot to close a drainage hole."

Thailand has the world's largest crocodile-farming industry with nearly 1,000 farms raising more than 700,000 crocodiles for their leather, meat and blood. Crocodiles are a protected species and farm operators need to obtain a licence from their local fisheries department, which checks the facilities are secure.

"Many farmers got into the business without proper knowledge," Mr Uthen added. "Licensing should only be granted to those who know how to take care of the crocodiles and those with suitable locations not at risk of flooding."