A Norwegian couple saved from thick mud in Krabi return to the site again to take photos of birds and mangrove creatures, but this time using plastic basins to prevent them sinking into the mud again. (Photo from Keeratisak Pukaoluan facebook)

Undaunted by their narrow escape, an elderly Norwegian couple rescued by a fisherman after becoming trapped in thick river mud in Krabi on Friday are back photographing birds along the same river - with the help of two black plastic basins.

The two tourists returned to the mud at the Chao Fa dam to resume their passion for bird photography on Sunday. But this time the husband was seen standing in one of two black plastic basins, to prevent him sinking while taking snapshots of birds and other mangrove creatures, with his wife standing nearby.

Krabi’s Muang municipality mayor Keeratisak Pukaoluan took a photo of the pair and posted it on his Facebook page on Sunday night.

The mayor admired the couple’s common sense in using basins to prevent being stuck in the mud again. He said people passing the area who see the pair stopped to greet them, as they would be staying for two more weeks.

The two visitors were saved by a local fisherman, Chat Ubonchinda, 44, who went to their aid when he saw they were in grave difficulty. Mr Chat won widespread praise after a video of his heroic deed was posted online.

The pair were taking photos along the Krabi River when they became stuck in the mud, sinking up to their thighs before Mr Chat spotted them from his boat on Friday morning.

Mr Chat lay down on the mud and let the pair put their weight on him so they could pull their legs free. After the couple were free from the mud he returned to his boat and left.

The video of the rescue had attracted 2.7 million views and 160,000 "likes" as of Tuesday morning. The clip, posted by Facebook user Theerasak Saksritawee, shows the man taking the couple's camera gear and tripod to higher ground before trying unsuccessfully to lift each of them from the mud. He then lay down, acting as a platform, so they could pull themselves free.

Tourism and Sports Ministry Kobkarn Wattanavrangkul  on Tuesday awarded Mr Chat a cash reward and a plaque to honour his actions in rescuing the elderly Norwegians, along with a special jacket declaring him a "Pride of Thailand". (continued below) 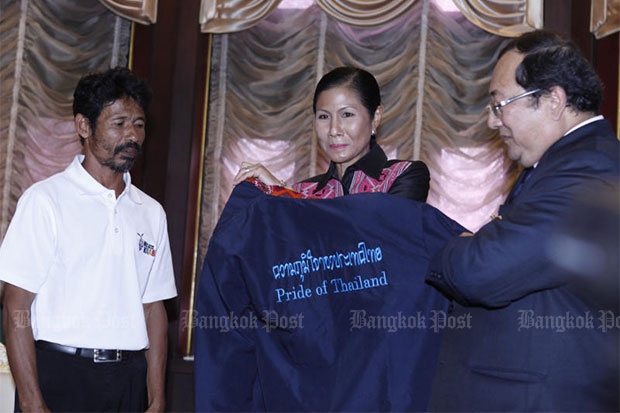 Tourism and Sports Ministry Kobkarn Wattanavrangkul (centre) presents a jacket ''Pride of Thailand'' to fisherman Chat Ubonchinda, 44, (left) in addition to a cash reward and a plaque to honour his actions in rescuing the Norwegian couple trapped in thick river mud in Krabi. The reward presentation was held at Government House. (Photo by Thanarak Khunton)

The presentation was made after the weekly cabinet meeting.

The minister praised Mr Chat, saying his good deed cast the country in a positive light. The ministry wants to honour people who truly do a good deed without expecting anything in return, she said. This sets a good example for other people to follow.