The Su Tong Pae Bridge, a popular attraction in Mae Hong Son’s Muang district, collapsed on Wednesday morning, dumping people waiting to give alms to monks into the waterway below. (Photo by Cheewin Sattha)

A large crowd of local people and visitors had gathered on the 2-metre wide, 500-metre long walkway to make merit and mark the end of Buddhist Lent, the Ok Pansa festival.

There were also 29 monks on the woven bamboo structure when a large section of it collapsed under the weight of so many people, sending many of them screaming into the waterway below.

Several people received minor injuries, but one man and a woman were seriously hurt by concrete posts.
They were released from the debris and immediately sent to a local hospital.

Sue Tong Pae, one of "unseen tourist attractions" in the province, is an ethnic Tai phrase meaning "success". The bamboo walkway was built by local residents and monks and crosses the Mae Sa Nga River and adjoining paddy fields. It links Kung Mai Sak village in Muang district, about 8 km from downtown Mae Hong Son, and Suantham Pusama meditation centre.

He said later the bridge was earlier damaged by heavy flooding in the province in August, and had ony recently been repaired.

He blamed the collapse of the bridge on the large number of people upon it. 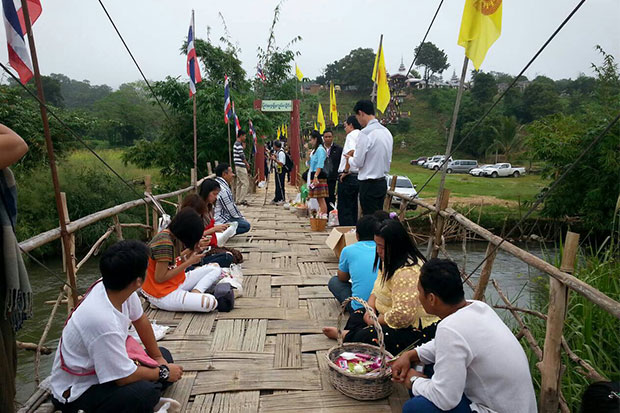 Local residents, carrying food and other offerings, wait on the bamboo bridge to give alms to monks, before the bridge collapsed on Wednesday morning.  (Photo by Cheewin Sattha) 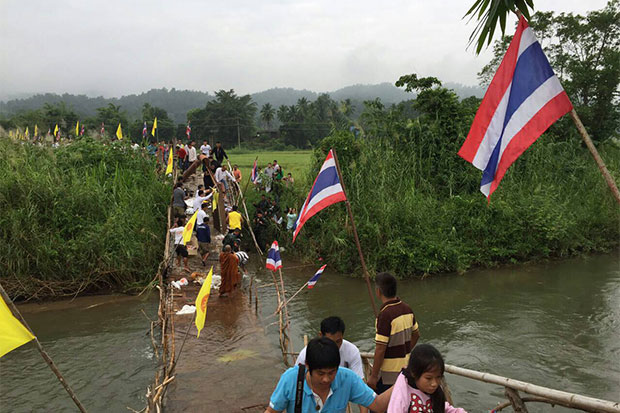 The bridge collapse into the river as people wait to give almost to monks on Wednesday morning.  (Photo by Cheewin Sattha)