Khanittha Phasaeng, the winner of Miss Uncensored News Thailand 2015, and organiser Somchai Leknoi hold a news conference near her house in Samut Prakan province on Thursday to end speculation about her crown. (Photo by Sutthiwit Chayutvorakarn)

SAMUT PRAKAN — The saga over the fate of Miss Uncensored News Thailand 2015 has ended after the organisers dismissed speculation about stripping the winner, a garbage collector, of the crown.

The crown was awarded to Khanittha "Mint" Phasaeng on Monday. But a controversy erupted almost immediately when organisers discovered she had lied about her educational  background by writing on the application form that she had passed Mathayom 6 (Level 12). Her highest educational achievement is Mathayom 3.

The organisers only discovered the lie when a university contacted them to offer her a scholarship. 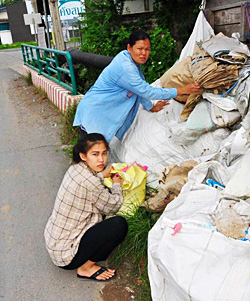 The 17-year-old beauty queen had already become the talk of the town after it was reported that she helps her mother collect garbage for a living, and that she once earned money as a second-tier dancer for musicians. She was on stage only during show intervals while the main dancers, the band and the singers were taking a break.

The once unknown beauty contestant has now achieved a level of fame because of her life among the garbage, but says she is not shy about it.

She promised to lend her mother a hand when she has time as it was a job that had helped her to grow up.

Mint apologised on Thursday to Somchai Leknoi, the contest organiser, for the education background lie, claiming she had no intention of doing it and had failed to check her application which was filled in by her uncle.

Mr Somchai said the organisers and the two runners-up held no grudge against her as the event did not limit the education of competitors. But she should not have lied about her education, he added.