US 'welcomes' Thailand to join TPP

Envoy Glyn Davies says normalisation of ties will occur only with an elected civilian government.

The United States “would welcome with open arms” Thailand’s ruling junta wanting the country to participate in the US-led Trans-Pacific Partnership (TPP) trade pact without waiting for the return of a full democratic government to the country, the newly appointed US ambassador to Thailand said on Friday. 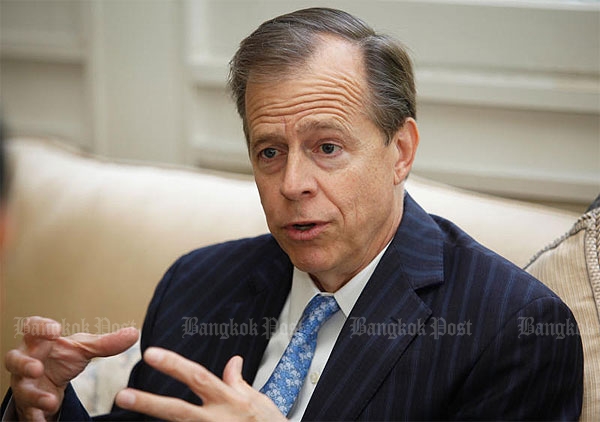 But the normalisation of relations with its partner and ally of more than a century will only take place after an elected civilian government is installed, Glyn Davies told the Bangkok Post.

“If they are interested, all they have to do is pick up the phone and knock on the door. We are ready to talk about it,” said the 58-year-old career diplomat, referring to the 12-nation free trade agreement, which was agreed by Asia-Pacific trade negotiators earlier this month.

Prime Minister Prayut Chan-o-cha, who received a courtesy call from Mr Davies on Thursday, has said Thailand has until 2017 to carefully consider if it is necessary to join the TPP, whose combined economic activity accounts for 40% of the global economy.

Three major private-sector bodies — the Thai Bankers’ Association, the Thai Chamber of Commerce and the Federation of Thai Industries — say the kingdom’s participation in the TPP will boost exports and foreign investments, especially in the automotive sector, but civic groups see higher prices of medicine and a loss of Thai courts’ jurisdictive power, especially over tobacco control laws, which could eventually boost cigarette consumption.

Mr Davies said Thai authorities have time to study the details of the agreement that have not yet been made public before it decides whether to join.

“We put the stress on whether Thailand has an interest in joining it. If it does, we would welcome with open arms,” he said, adding Bangkok would also need to continue with its economic and trade reforms to qualify for such a “high-standard agreement”.

Despite Washington’s support for Bangkok to join the TPP, the 183-year-old bilateral relationship will return to normal only after Thailand has an elected civilian government, said Mr Davies, a former US Special Representative for North Korea Policy.

“This is one of the reasons why we so often say we hope you can get back to that soon because I want that relationship to be at 100%. But it won’t stop me from working on the other 95% of the relationship in the meantime,” said the envoy who met two senior cabinet ministers and gave four one-on-one media interviews this week.

Constrained by its laws against foreign military governments, Washington will make its annual military exercise with Thailand, known as Cobra Gold, another “light” year in 2016, said the envoy, whose softened approach in engaging with the May 2014 coup leaders appears to differ from that of his predecessor Kristie Kenney.

“I think the Cobra Gold military exercise will look a lot like last year. It would be focusing on humanitarian assistance and disaster relief as before,” Mr Davies said from his leafy century-old ambassadorial residence on Wireless Road. “The US’s existing law and policy put limits on levels of military-to-military leadership, but real work happens among soldiers on the ground and that still goes on.”

Following the 2014 coup, the US army substantially scaled back its Cobra Gold personnel from more than 8,000 in previous years to 3,700 this year.

Section 508 of the Foreign Assistance Act, a US law first enacted in 1961, says the United States must cut aid to any country “whose duly elected head of government is deposed by military coup or decree”.

However, military cooperation in humanitarian activities will continue.

Mr Davies said the US would offer the Thai military help again after both countries conducted a joint aerial search for “boat people”, including Rohingya, in the Andaman Sea in May and June this year with assistance from US troops based in Malaysia.

“If there is a need and we can do it, I am sure once again we will approach the military government and ask for permission,” he said as Thai authorities expect movement of migrants trying to escape hardship in Myanmar’s Rakhine State and Bangladesh to start again when the monsoon ends later this year and early next year.

Thailand also faces fierce criticism by the United States over its poor record in addressing human trafficking and slavery in its fishing industry. Many Rohingya have been sold to work on Thai fishing boats.