The army has launched a probe into reports a major general and a colonel are involved in a high-profile lese majeste case now before police, Prime Minister Prayut Chan-o-cha said Wednesday. The officers were reportedly implicated by Suriyan Sucharitpolwong, a well-known fortune-teller known as Mor Yong, a key suspect in a network accused of making false claims involving the monarchy to solicit money from business operators.

An army source said one of the military suspects was a senior officer attached to the Army Secretary Office.

He said the army was looking for solid proof to substantiate the allegations, though the probe was making progress.

A police source said an investigation had found the army colonel implicated in the lese majeste case has fled over the border to Myanmar's Myawaddy township, opposite Tak's Mae Sot district.

Before leaving the country, he withdrew 20 million baht from a bank and transferred the money to a woman in Chiang Mai.

The source said the money is believed to have been solicited from a private company which the key suspects in the case claimed would produce 100,000 T-shirts for distribution in the upcoming "Bike for Dad" event.

The price of the T-shirts was quoted at 280 baht apiece, while the estimated cost was half that. The officers were said to have cited the monarchy to seek support from various business operators.

The source said police have lodged 13 charges against Mr Suriyan and his network. There are 20 more charges being prepared after police complete witness questioning.

Mr Suriyan was one of three people arrested recently for lese majeste under Section 112 of the Criminal Code.

The other two were his aide, Jirawong Watthanathewasilp, and Pol Maj Prakrom Warunprapa, a computer crime officer who allegedly committed suicide while in custody. 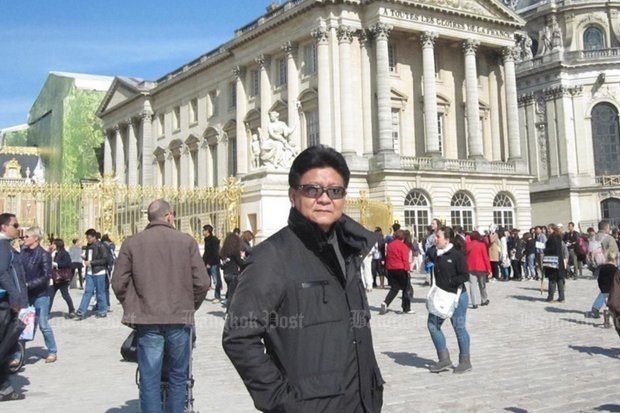 Pol Gen Prawut Thavornsiri, former police force spokesman and deputy chief, disappeared last week during a "holiday" in Europe, and resigned from the Royal Thai Police by a letter to the chief. (Photo from Pol Gen Prawut's social media account taken during a previous visit to Europe, posted May 9, 2012)

The resignation was tendered on Oct 29 through the staff division. It was among 30 files requiring his authorisation and he did not remember the details.

He did not give any reason why Pol Gen Prawut decided to resign. His resignation would be submitted for royal endorsement so it can take effect.

"I have only just found out myself. I asked the staff division and was informed Pol Gen Prawut had already tendered his resignation. It would require my approval but I sign many papers, and I couldn't remember his case.

"Today I can confirm his resignation. I've approved it," he said.

The police later insisted the report had been misquoted.