Coconut businesses have lashed out over fears their products could be boycotted due to concerns of monkey abuse in the industry.

The outcry follows a report by Spectrum in September on pig-tailed macaques being used to collect coconuts in the southern province of Prachuap Khiri Khan, the country’s biggest coconut producer.

Clients from as far afield as the UK, Japan and Australia have since emailed manufacturers to check on their supply chains. 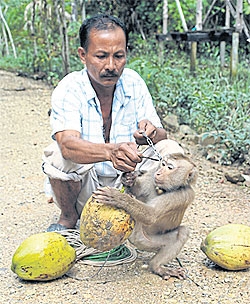 “I tell them that there are only a few cases [of monkey labour], and that they are used as a show for tourists,” he said. “I am concerned about the reputation of the coconut industry, since we export a lot of products.”

Earth Born Co sources organic coconuts from 3,900 rai of land in several provinces, all of which use human labour. Some 70% of its products are exported.

Thailand exported 11.4 billion baht worth of coconut products last year, according to the Office of Agricultural Economics.

While locals argue that macaques have been helping humans pick coconuts for hundreds of years, wildlife experts question whether the practice — in which most of the monkeys are removed from the wild — violates the new animal cruelty law.

The Department of Livestock Development is in the process of drafting a separate animal welfare law, expected to be enacted within the next year, containing specific regulations concerning monkeys used to harvest coconuts, such as age guidelines and training restrictions.

Merit Food Products Co, which exports coconut milk to the US, Australia and Europe, receives frequent questions related to monkey abuse from overseas visitors. A UK client has also directly asked Merit Food to confirm it had not been using monkeys.

“As soon as they arrive, they ask if we use monkeys, and sometimes I get asked if we ride elephants to school,” said general manager Peerachote Charanwong. “The average foreigner doesn’t know much about Thailand.”

Merit Food has a factory in Chon Buri province but sources coconuts from a 1,500-rai plantation in the eastern province of Chanthaburi. Because the trees are 15m tall at most, workers are still able to use long sticks fitted with a sharp sickle to harvest coconuts.

For farmers, using macaques makes economic sense, since they are capable of collecting 600-1,000 coconuts per day, compared to only 100-200 for humans.

Ananta Dalodom, president of the Horticultural Society of Thailand, estimated that less than 10% of the country’s total coconut crop is harvested by macaques. But Edwin Wiek, director of the Wildlife Friends Foundation Thailand, said the figure is closer to 60-70% in southern provinces.