They were the third and last lot of the cold paintings that she repaired. Earlier she had restored 25 reverse glass works to the temple.

The paintings are 60x60 centimetres with wooden frames and are among 180 gildings on glass brought from Mawlamyine in Myanmar in 1867 to decorate walls of the temple built the same year.

Reverse painting on glass is an art form consisting of applying paint to a piece of glass and then viewing the image through glass on the other side. The art form was popularised by 18-century French decorator Jean-Baptiste Glomy, who called the process verre églomisé. Known in German as hinterglasmalerei, the "cold painting" or "gilding on glass" was widely used for sacral paintings since Middle Ages. 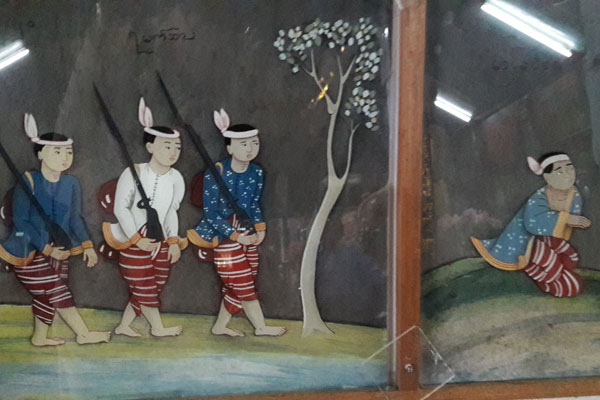 The temple's cold paintings illustrate the history of Buddha and the lifestyles of Myanmar people back in historic times. Captions on the paintings were written in Myanmar and there annotations describing the original painters as Shan residents of Mandalay.

Mrs Jensen earlier had visited the Buddhist temple and seen damaged the reverse glass paintings being improperly repaired, so she volunteered to do the job properly.

On Nov 12, she will discuss the restoration project and her work with the temple in a lecture at The Siam Society in Bangkok.