Doctors brief the media on the condition of actor Thrisadee "Por" Sahawong at Ramathibodi Hospital in Bangkok on Wednesday morning. (Photo by Panupong Changchai)

Popular actor Thrisadee "Por" Sahawong remained in a coma on Wednesday morning but was responding to treatment, according to doctors at Ramathibodi Hospital. 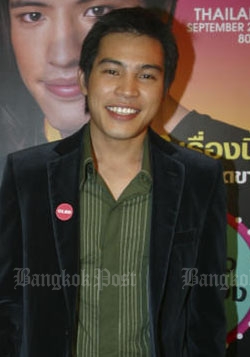 Hospital director Dr Surasak Leela-udomlipi told the press the 37-year-old actor was critically ill with dengue haemorrhagic fever when he arrived at the hospital on Monday with breathing difficulties.

He was placed on a respirator and later suffered renal failure. His condition worsened on Tuesday, when his blood pressure dropped and acidity increased in his blood. He also suffered severe lung bleeding, shock and heart arrhythmia, and needed resuscitation for about three minutes and blood pressure stimulants.

Doctors diagnosed that his immune system was overloaded.

Dr Surasak said Por was now responding to treatment but doctors were worried about possible complications and were monitoring his condition closely.

It was earlier reported that Por had been ill with dengue fever for a week before being admitted to Ramathibodi Hospital in Bangkok.

The actor was the Thai Cleo "bachelor of the year" in 2004 and has been in 30 television series since 2005. He also starred in plays and commercials, has been a TV programme host and made musical recordings.

Dr Sophon Mekthon, permanent secretary for health, said more than 100,000 people had been treated for haemorrhagic fever in Thailand this year. The figure was 110,000 last year and 150,000 in 2013.
There was an outbreak of the disease every other year, on average, he said.

There were four strains of the disease and no vaccine for any of them. The best defence was to keep the area around your home free of stagnant water and check for and destroy any mosquito larvae at least once a week.

Dr Amnuay Gajeena, director-general of the Disease Control Department, said people who have a high fever for 1-2 days, without any relief, should see a doctor immediately because they could be suffering dengue haemorrhagic fever.

People who were infected for a second time, with a different strain of the disease, could become critically ill, he said.