Bidding in the 4G auction ends in the 86th round Thursday evening. (Photo by Wichan Charoenkiatpakul)

AIS and True have won the two 4G licences in a 30-hour auction that ended at 7pm on Thursday, bringing in 80.78 billion baht in state revenue.

The prices were 150% above the reserve price for the first licence and 158% for the second licence.

In terms of estimated real spectrum value, the first licence was 200% higher while the second was 206% more.

After 30 hours and 86 rounds, the National Broadcasting and Telecommunications Commission (NBTC) announced the winners at around 8pm.

The bids were more than double the estimated value of the bandwidth. The base price for each licence was 15.91 billion baht.

The other two bidders who lost were JAS Mobile Broadband Co Ltd of Jasmine International and DTAC Trinet Co Ltd, a unit of Total Access Communication Plc (DTAC). Both bid for the first licence and offered 38.99 billion baht and 17.50 billion baht respectively.

The NBTC is expected to endorse the auction results on Nov 17.

Four telecom operators joined the auction, which began at 10am on Wednesday. The bidders were subsidiaries of four major telecom groups, three of which are mobile operators.

Shares of the SET-listed parent companies of the bidders plummeted as investors feared the prices might have already been too high.

The auction is seen as a do-or-die game for the existing big three mobile operators, which could lose opportunities to others if they did not get the licences.

NBTC secretary-general Takorn Tantasith called the auction transparent and successful, even before it was complete.

Bidding started at 10am on Wednesday in secure rooms at the NBTC's headquarters.

AIS, True, DTAC and Jasmine competed for the two licences for 15 MHz each on the 1800-MHz spectrum. 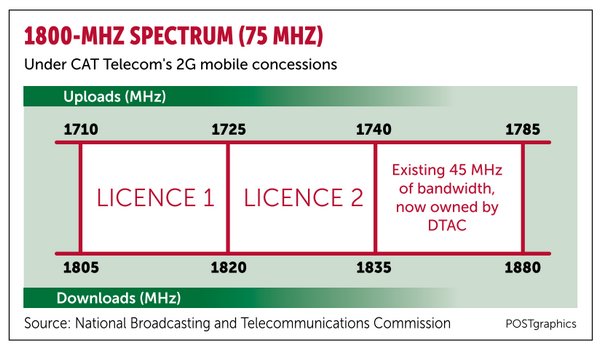 The highest bidder at the end of the initial nine hours was believed to be AIS, which bid 26.26 billion baht. That bid was 65.2% above the reserve price of 15.9 billion baht, but not enough to win.

AIS, 23% owned by Singapore Telecommunications Ltd, is the only major Thai operator that does not offer a 4G service. Analysts expect a licence will help AIS increase its revenue from mobile data.

True, 18% owned by China Mobile and controlled by billionaire Dhanin Chearavanont's Charoen Pokphand Group, is expected to take the second licence, as it needs one to maintain its leading position in 4G services, analysts said.

The companies are in a quiet period, meaning they cannot comment publicly on the auction.

The winning bidders must pay half the bidding fees within 90 days after the auction date. However, if they want to obtain their licences immediately in order to jump-start their 4G services, they can receive the licences the date they pay half of the fee, starting from the auction date.

The NBTC initially planned to close the auction at 9pm but decided to give a half-hour break before resuming bidding until they have winners, NBTC vice-chairman Settapong Malisuwan told a news conference.

The NBTC will hold another auction for two 4G licences of 900 MHz frequency on Dec 15.