One of five vehicles destroyed in a fire at a car tent in Pathum Thani's Muang district on Thursday morning. (Photo by Pongpat Wongyala)

Fire crews from the Ban Mai tambon administration organisation and nearby areas took about 40 minutes to combat the fire, which was raging through a two-storey wooden house next to the car lot.

The operator's home was reduced to ashes and five of seven vehicles were burned. Damage was estimated at 2 million baht, said police. Car dealer Anont Sophonthada, 36, sustained minor arm injuries while evacuating his four-year child and his wife.

Mr Anont told police he and his family were sleeping on the second floor of the house when the fire broke out. They tried to flee through the front of the house, but flames forced them to escape out the back. 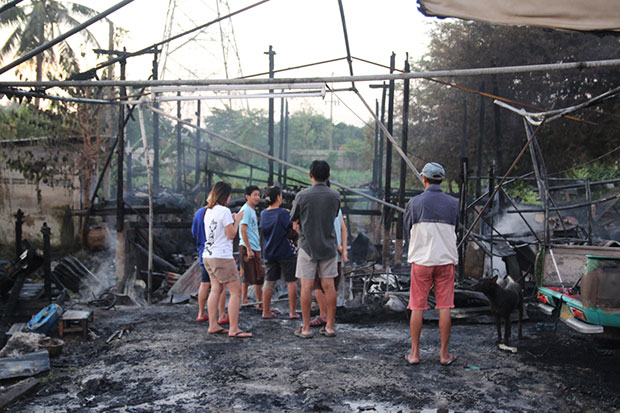 People look at the wreckage of a used car dealership and house damaged by a fire Thursday morning in Pathum Thani. (Photo by Pongpat Wongyala)