A guest pours holy water from a conch shell onto the hands of the four-year-old "groom" sitting next to his twin sister at the wedding ceremony, which is rooted in the belief that twins of opposite genders are at high risk of being taken by evil spirits. (Photo by Chudate Seehawong)

Four-year-old twins have been "married" in Chai Nat province in line with a traditional belief that the ceremony will prevent "soul takers'' from taking the life of one of them.

The wedding was held at the twins’ home in tambon Chai Nat in Muang district on Saturday morning, with many guests participating. The event featured all the typical trappings: a wedding parade, dowry, monks’ prayers and a feast. All of the guests received invitation cards to attend.

The twins — Pannawit "Nong Crape" Saeng-awut and his sister Panthita "Nong Cream" — were dressed in traditional wedding attire as they received blessings from monks, relatives and guests. All of the participating guests wished the pair a long life and excellent health.

Somkiart Saeng-awut, the father of the twins, said the symbolic ceremony was held to ward off bad luck for his children.

The decision to hold the ceremony arose from a traditional belief that twins of opposite genders were lovers in the past life. They were born twin siblings because mistakes had occurred during the sending of their souls, he said.

If nothing was done, one of the twins would lose his or her life, he added.

To save the lives of the children, the family held the wedding in an attempt to fool "soul takers" into believing that the siblings were not twins but were an ordinary married couple, said the father. 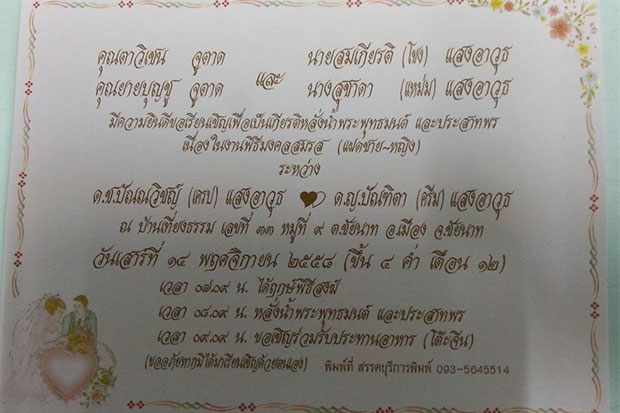 A wedding invitation shows the names of the twins' parents and grandparents as hosts of the ceremony for the four-year-old twins at their home in Chai Nat. (Photo by Chudate Seehawong)

In his community, families who had boy and girl twins often held such wedding parties to prolong the lives of their twin children, he added.

The daily infection rate is rising, with confirmed new cases up 26% on Tuesday from 1,917 on Monday, and coronavirus-related deaths also increasing.