SAMUT PRAKAN — A man narrowly escaped death when half the roof on a warehouse he was looking after collapsed around him after a rainstorm Monday afternoon.

The incident occurred at a chemical and plastic resin warehouse connected to Vatech Industry Co in tambon Thaparak of Muang district.

Warehouse caretaker Thongdee Niyomchom, 48, said he was sitting in front of the building when he heard a loud noise inside. He checked, but did not find any irregularity, until he was about to leave.

"I was almost to the front entrance when the roof collapsed and everything fell down behind me. I sprinted my way outside and called the police," Mr Thongdee said.

About half of the roof structure and a portion of wall tumbled down. The caretaker said the collapse happened shortly after it rained.

The one-rai facility had been built decades ago and was considered in deteriorating condition, according to Pol Lt Col Chart Artchareon, a duty officer at Samrong Nua police station. Experts will examine the damaged structure and determine the cause of the collapse. 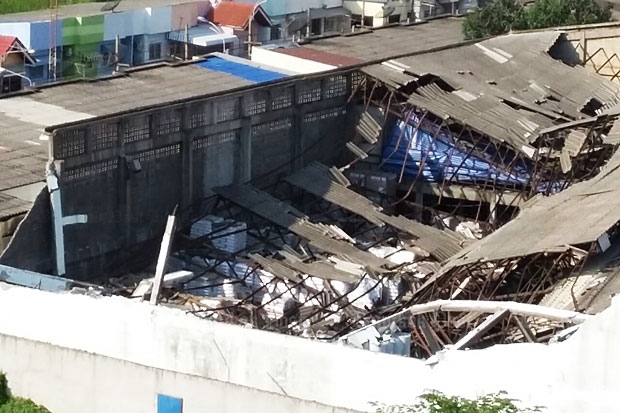