Convicted serial child rapist and killer Nui appeared at a media conference at the Metropolitan Police Bureau, Bangkok, after his arrest in December 2013. (Photo by Apichart Jinakul)

The Criminal Court on Tuesday sentenced a serial child rapist to life imprisonment for sodomising and killing a young boy in Loei province in 2013, after he had been released from jail for similar crime.

The 34-year-old man is known only as Nui, Ting Tang or Khundej. He has neither a last name nor identification registration. The court initially sentenced him to death, commuted to life imprisonment because he confessed.

On Tuesday, Nui was sentenced for sodomising a seven-year-old boy on Phu Pha Sing mountain in Nong Ya Plong sub-district of Wang Saphung district, in the northeastern province of Loei, on Nov 10, 2013.

He lured the boy away from a fair at Wat Sri Udomwong to the mountain, where he abused and murdered him. His confession after his later arrest led officials to the body.

In July 2015, Nui was sentenced to life imprisonment, commuted from death, for the attempted rape, he was disturbed by a passer-by, and then murder of a 4-year-old girl in Muang Loei district of Loei on Feb 5, 2013. He had lured her from a Red Cross fair.

In March last year, the same man was sentenced to life imprisonment for the rape and murder of a 6-year-old girl known as Nong Cartoon. He lured her from her parents' pickup truck, where she had been left alone, and attacked her on a vacant area of land close to Bearing BTS train station in Bang Na district, Bangkok, on Dec 6, 2013.

According to police, Nui grew up in an orphanage and a couple adopted him at age seven. He lived with them in Puai Noi district, Khon Kaen province. His adoptive parents died when he was 15 and he went  to live with their relatives in the same district.

Nui was never educated. He had no ID card and he worked as a labourer at construction sites and fairs in various provinces.

His first victim was a seven-year-old girl who went to a temple fair alone in Puai Noi on Jan 18, 2008.

He tried unsuccessfully to rape her, then to strangle her. The girl, however, survived, and identified him following his arrest. He served three years and eight months in prison in Phon district of Khon Kaen and was released on Aug 23, 2012.

After his release, Nui returned to his former village in Puai Noi, but the local people rejected him for fear he would prey on other children.

He told police he had attacked about 10 children, and killed four of them. 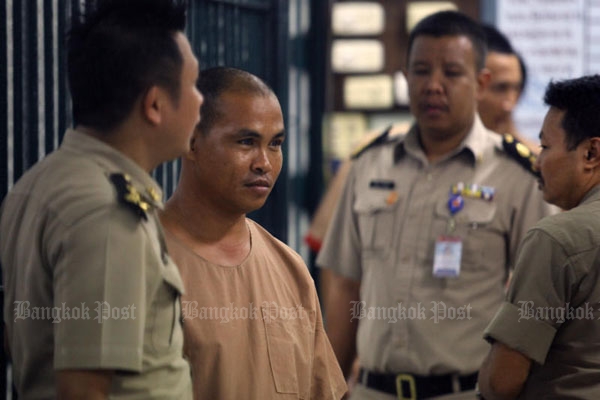 Nui at the Criminal Court on Tuesday (photo by Pornprom Satrabhaya)