The completion of Terminal 2 at Bangkok's Don Mueang airport, scheduled for next month, will be delayed again and authorities are yet to decide whether it should be partly opened to relieve congestion.

Nitinai Sirismatthakarn, president of Airports of Thailand Plc (AOT), said on Wednesday that the opening of Terminal 2 had been postponed from August to December, but more shops were being built, which could take 30-60 days, and the owners had yet to sign contracts. Therefore completion in December could not be realised, he said.

Earlier it was reported that the opening was postponed from August to September due to delays in the renovation of facilities at the 101-year-old airport. That included ticketing, belt conveyors, air-conditioning systems and toilets.

"Contracts have been signed with 111 shop operators, covering 8,800 square metres or 60% of the total area of 13,000 square metres. Negotiation is underway for the remaining 40% and the signing of their contracts will be accelerated so that it will be done within November," Mr Nitinai said.

Therefore, all those shops could not be finished by December and he would ask the AOT board to decide if Terminal 2 should be partly opened next month. Airlines were ready for the opening at present, he said.

However, Mr Nitinai was worried that a partial opening would affect the image of the airport because visitors would see ongoing construction. He would ask the AOT board to decide on Dec 2.

Don Mueang airport is serving about 29 million passengers a year, although its official capacity is set at 18.5 million. Terminal 2 would relieve the congestion as it would raise the official passenger-handling capacity to 30 million per year, Mr Nitinai said.

After the opening, Terminal 1 will serve international flights and Terminal 2 domestic ones, he said. He also expected Terminal 2 to increase the revenue of Don Mueang airport from 1.3 billion baht to 2.5 billion baht annually.

Don Mueang airport was opened in 1914. It was closed when Bangkok's Suvarnabhumi airport opened in September 2006 and then was partly reopened in March 2007 to relieve congestion at Suvarnabhumi. 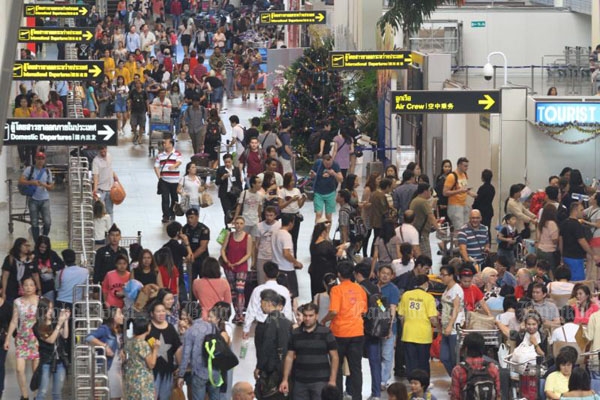