A punishing life in Bangkok

Sakulrat Thongtongkham knows she will be punished by Bangkok’s unrelenting and unforgiving traffic should she leave for work later than 6am. 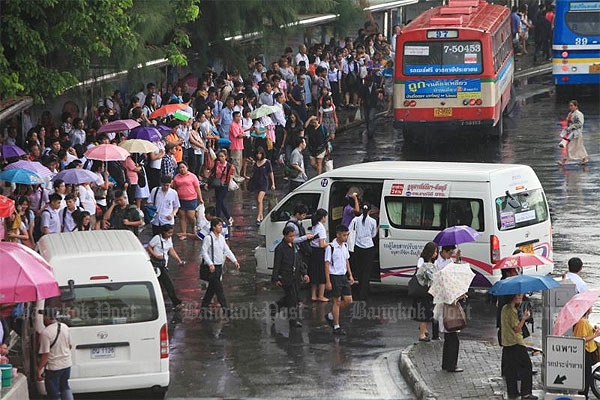 Public vans and buses are the most used form of transport in Bangkok as they cover a larger area of its many districts. Kitja Apichonrajarek

Like most Bangkok residents, the single mother has to get up very early in order to leave her house on Sukhumvit 105 before 6am. She has to drive her children to school along the way and reach her office on Sathon Road in time to start work.

Knowing that commuters in every big city are in the same situation of balancing domestic duties with the need to meet their work obligations, the 44-year-old Bangkok native still feels that not all of them get stuck in traffic for three hours each day like her and millions of others across the sprawling and crowded Bangkok metropolis.

The chronic congestion is close to unbearable, Ms Sakulrat notes. The existing urban infrastructure seems unable to cope with the number of vehicles on the roads.

Traffic congestion is one of the 10 main reasons why living in Bangkok is an unpleasant experience, according to a recent study by the Thailand Future Foundation.

Bangkok was voted by Travel and Leisure magazine as the world’s best city for four consecutive years between 2010 and 2013. But the city’s “liveability” ranking by the Economist Intelligence Unit fell from 102 to 140 last year, according to the foundation.

The foundation asked why Bangkok is a good city for tourists but is not seen as one that is liveable for residents.

Ms Sakulrat is also concerned about the high cost of living in the city. From the cost of accommodation to transport and food, things have become way too expensive.

Transportation fees can be costly, Ms Sakulrat notes. Many people can spend hundreds of baht getting to and from work via public transport each day, she says.

It’s understandable that more people are turning to private vehicles to get to work as they afford more privacy and comfort, she adds.

The value of money has fallen, resulting in a rising cost of living which has reached an almost unaffordable level in the last few years.

She recalls how just two years ago she could kill her hunger with a big lunch for less than 40 baht. The mother of two now finds she can barely afford a fancy lunch in a restaurant. What she manages to get for lunch is a much smaller portion which costs at least 50 baht.

“If I have a hundred baht in my pocket, I prefer to stay home and watch television at weekends,” says Ms Sakulrat, a company manager.

The city makes people work harder and live uncomfortably, she said, adding most residents are struggling to cover their monthly expenses, while money is not easy to come by these days.

Office worker Natchaphim Rattanasinnok, 26, said public transport was her biggest monthly expense. Reliant upon the public transport system, which includes bus, the skytrain and motorcycle services, she spends about 300 baht a day travelling from her home in Soi Vibhavadi Rangsit 27 to her office near the Democracy Monument and back. It takes about an hour and a half each way.

She wants the authorities to find ways to cut public transport costs, which are making her life difficult. She believes cheaper fares will encourage more residents to use the public transit system, which will help ease traffic congestion.

“I must live frugally. I have to work hard to stretch every baht because I live on one income,” said Ms Natchaphim, a native of Nakhon Ratchasima who moved with her father to a townhouse in the city more than eight years ago.

She said her family cannot afford a decent-sized house in the city which can be very expensive, so they decided to buy a house on the city’s outskirts, even though that meant extra hours of travelling to and from the business district for work.

“Travelling around the city is just a waste of our time,” she said, urging authorities to develop a public transit network that link the suburbs to the city centre.

Ms Sakulrat urged the BMA to make Bangkok more habitable for residents. She called for more public parks in communities where residents can get involved in outdoor recreational activities which are part of a healthy lifestyle.

There are few parks in the city. Many of them, however, are too small and crowded. Unfortunately, she said, creating new and sizeable parks is not easy.

Ms Sakulrat and Ms Natchaphim’s concerns are a clear reflection of the public mood about the BMA’s management of the city and echo the feelings raised in the Thailand Future Foundation study.

SEOUL: North Korean state media reported on Wednesday that North Korea has successfully tested a new hypersonic gliding missile, in what would be the nuclear-armed nation's latest advance in weapons technology.