A Thung Song police officer points to a locked antique safe at an old bank building there. (Photo by Nutjaree Raekrun)

NAKNON SI THAMMARAT – A locked vault found in an abandoned bank building set to be turned into a museum has resisted any attempts to open it.

Sak Martwiwat, a senior official from Thung Song railway station, said the building earlier belonged to Siam Kammajol bank, the forerunner of Siam Commercial Bank, and dates back about 108 years.

The bank later closed the branch and the State Railway of Thailand took it over as a cargo centre.

Thung Song municipality realised the historic nature of the building, so it sought to lease the building and make it a local museum. An inspection revealed there was a locked vault, so representatives from the SRT, municipality and police agreed to open it on Monday.

With a large crowd of curious onlookers, safe crackers struggled and were unable to open the four century-old locks that guard the safe's mystery without damaging the antique mechanism

Mr Sak said the SRT and municipality will find a skilled locksmith to open the vault later.

Thung Song mayor Songchai Wongwatcharasamrong said the town was a busy railway interchange in its glory days, so the Siam Kammajol bank had opened its first branch in the South there.

While the municipality is trying to showcase its history, the two-storey building needs a lot of renovation to ensure it will last another century or more, he said. 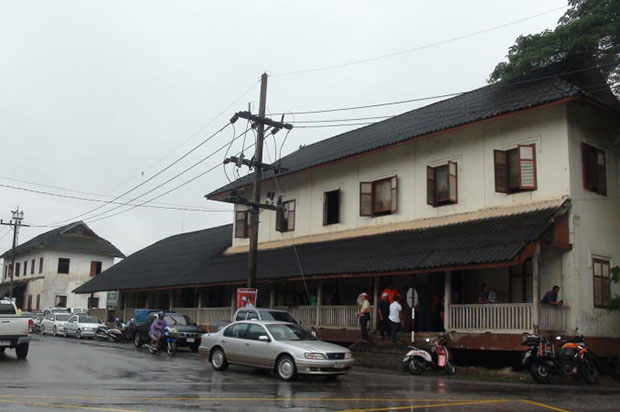 A locked vault was found in this old building that once housed Siam Kammajol bank in Thung Song district of Nakhon Si Thammarat. (Photo by Nutjaree Raekrun)