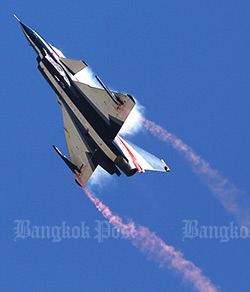 As the Falcon Strike 2015 war games draw to a close in this northeastern province this week, Bhanupong Seyayongkha, the Directorate of Operations chief, tried to ease possible worries from neighbouring countries, saying the joint operation in the air only underscored close defence ties between Bangkok and Beijing.

The war games had no intent to threaten regional nations and should not be linked to growing tension in the South China Sea, said AM Bhanupong. The two countries shared the same goal of seeing peace in the region, he added.

The same tone was echoed by Feng Aiwang, China's deputy chief of staff for the air force, who said the operation reflected long-standing ties between the two countries, which have continued for four decades.

"Thailand and China join hands together and they are brothers," Maj Gen Feng said.

Falcon Strike began on Nov 15 and will end on Friday. China has dispatched six SU-27 fighter jets to take part in the drill with five Gripen planes from Thailand at Wing 1 in Nakhon Ratchasima.

It is one in a series of joint military exercises that already have involved the army and marines.

China is in a dispute with Brunei, Malaysia, Vietnam, the Philippines and Taiwan over claims to part or all of the islets in the South China Sea. 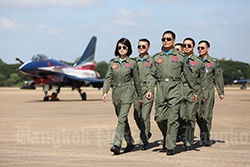 Chinese pilots of the August 1st Aerobatic Team walk at Wing 1 in Nakhon Ratchasima province on Tuesday with one of the aircraft to be used for an airshow in the backgroup. (Photo by Pattanapong Hirunard)

Worries about the potential conflicts were reflected in the recently ended Asia-Pacific Economic Cooperation summit in Manila and the top-level meeting of Southeast Asian leaders and their partners in Kuala Lumpur.

AM Bhanupong and Maj gen Feng on Tuesday observed a practice for an acrobatic air show to start on Thursday and Friday at the Nakhon Ratchasima air base.

The show of the August 1st Aerobatic Team from China will cap the show and host Thailand expects more than 30,000 spectators to pack Wing 1 for the free event.

The Thai air force will use F-16 and Gripen jets for the show and the Chinese team will deploy Chengdu J-10 aircraft.