This photo of Praewa using her phone after the accident turned social media against the teen-ager. (Photo by Sarot Meksophawannakul)

The Civil Court on Thursday ordered the family of a young driver who killed nine and injured four van passengers in a crash on Bangkok's Don Muang tollway five years ago to pay about 27 million baht in total compensation to the victims.

Orachorn's sedan ran into the rear of a passenger van on the Din Daeng-Don Muang tollway at the night of Dec 27, 2010. At the time she was 16 years old, too young to have a driving licence.

In 2011, she was charged with unlicensed driving, reckless driving causing deaths and injuries and property damage, and using a mobile phone while driving.

On Thursday the Civil Court ordered not only Orachorn but also her parents to pay the compensation,  because the parents had failed to prove they properly supervised their daughter.

The case involved 28 plaintiffs who are relatives of the dead and the injured people. The compensation ordered by the court ranged from 4,000 baht to 1.8 million baht per case, and the combined sum came to 26.88 million baht, plus 7.5% interest.

The plaintiffs earlier demanded 113 million baht and said they would decide later whether to appeal.

Orachorn's Honda Civic car crashed into the back of the passenger van, which was heading to Victory Monument from Thammasat University's Rangsit campus. The van was driven into the safety barrier on the side of the elevated tollway near the Bang Khen exit. The force of the impact catapulted passengers from the vehicle and they plunged down onto Vibhavadi Rangsit Road below.

On Aug 31, 2012, the Central Juvenile and Family Court found her guilty, sentenced her to three years in prison and banned her from driving until she is 25. The prison term was commuted to two years, and suspended for three years because she cooperated with investigators.

The court dismissed the charge of using a mobile phone while driving due to lack of evidence. A photograph of her calmly using her mobile phone on the tollway immediately after the accident was widely used by the media and angered many people.

Orachorn took the case to the Appeals Court, which on April 22, 2014, upheld the two-year jail term, but extended the suspension period from three to four years. The court also ordered her to do 48 hours of community service a year for four years.

In May this year the Supreme Court rejected Orachorn's final appeal. She pleaded a lack of intent. The court ruled the appeal covered no new ground.

Seventeen plaintiffs were at the Civil Court on Thursday while the family of Orachorn was absent. 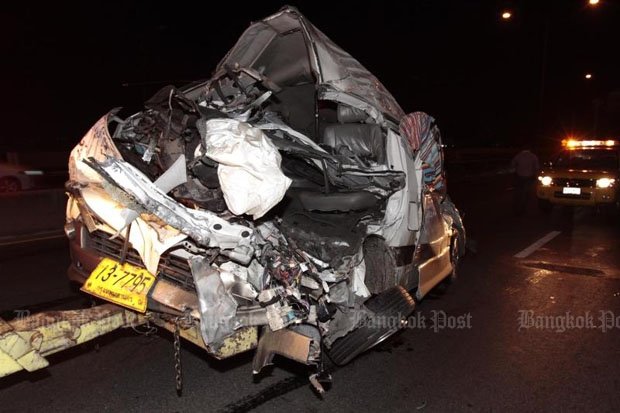