Police search a Toyota truck believed to have transported the dead body of former Australian Hells Angels leader Wayne Schneider to the burial site outside Pattaya. (Photo by Trinai Jansrichol)

Police on Wednesday arrested an American man and a Thai woman in connection with the kidnapping and murder of a former Australian Hell's Angels gang leader in Pattaya.

The 21-year-old American, identified as Tyler Joseph Fulton Sheen Gerard, was taken into custody around 11am Wednesday at an immigration checkpoint in Sa Kaeo province as he was trying to enter Cambodia.

A team of immigration officials, rangers and police spotted a foreigner wearing a white vest and blue sports shorts with a bandage wrapped around his right elbow as he walked from Rong Kluea border market to Aranyaprathet immigration checkpoint.

His passport matched a list of suspects wanted for Monday's abduction of 37-year-old Wayne Rodney Schneider from his rented luxury home in tambon Nongprue of Bang Lamung district.

Schneider, a former "most wanted" criminal with arrests for drug trafficking, robbery, obstruction of justice and armed assault in Australia, was found dead early Wednesday in a wooded area of Sattahip district.

Lying naked in the 1.8-metre-deep grave hidden amidst brush along Viharn Sian-Khao Cheechan road in tambon Na Jomtien, Schneider's heavily tattooed body showed serious head injuries and a broken neck, police said. There was no identification found with the corpse.

Police found tyre tracks about 100 metres from the road to the burial site on "Big Buddha Hill", as it is known locally. (continued below) 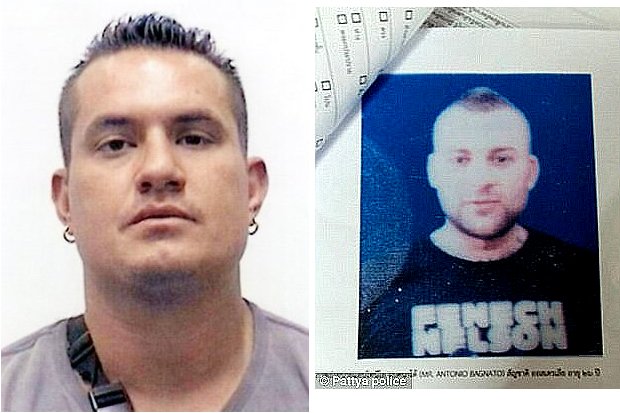 An arrest warrant was issued on Tuesday for Australian Antonio Bagnato, 26, on charges of conspiring to assault and detain Schneider, his reported partner in a Sydney fitness business.

But immigration officials announced today that Mr Bagnato had managed to escape Thailand. His route of escape and destination were not disclosed. Police on Wednesday, however, did arrest Mr Bagnato's Thai wife, who is accused of renting the white Toyota Vigo pickup truck used to carry out the kidnapping and transport Schneider's dead body.

The woman, whose name was withheld, allegedly paid 5,000 baht to rent the truck from Nov 28 to Dec 3 from a dealer off Third Road in central Pattaya. She reportedly told police she did not know what the truck was to be used for and was oblivious to any plan to abduct and kill Schneider.

But police said the woman confessed Mr Bagnato told her to delete all text messages from her telephone about the truck rental.

Pattaya and Chon Buri police on Thursday searched the Bagnato household in the resort city, but nothing of significance was reported to have been found.

Mr Bagnato is believed to have been the ringleader of the gang of five masked men that whisked Schneider from his 130,000-baht-a-month Jomtien Park Villa home on Thepprasit Soi 17 around 5am on Nov 30.

Security guards identified Mr Bagnato to police and said they believed all the other assailants were foreigners. Mr Gerard, the American apprehended today, is accused of being one of them.

Immigration police said his name was on a Thai watchlist, as was Schneider's.

Pol Col Pairat Pukcharoen, chief of Sa Kaeo immigration police, said his agency had been working closely with Chon Buri immigration and Pattaya City police on the case to prevent suspects on the watchlist from escaping the country.

Pol Maj Gen Amporn said early Wednesday that Schenider's body was found following the discovery that his abductors had rented the Chon Buri-registered Toyota at a car tent on Soi Xyte.

Investigators tracked the vehicle using the GPS installed in it and found that it had been parked near the Big Buddha Hill burial site on Monday for almost two hours starting at 7am, two hours after Schneider's abduction, said the Chon Buri police chief.

Investigators eventually found the truck abandoned on Soi Kasetsin 5 on Phra Tamnak hill in South Pattaya on Wednesday morning. Officers found dirt and grass stains on the vehicle's floor and the seats were wet, according to Pol Col Sukthat Pumpunmuang, chief of Muang Pattya police station.

Forensic officers collected fingerprints left at the vehicle, but found no other evidence.

Schneider was said to have been living in Pattaya for only a month and was invited to rent the luxury villa with a former gang rival, ex-Comancheros leader Amad Malkoun. The Hell's Angels this year displaced the Comancheros as Australia's top outlaw motorcycle gang, Australian media said, noting that the two gangs have had previous violent confrontations.

Mr Malkoun -- who also has a lengthy criminal background including drug trafficking -- said he, Schneider and Mr Bagnato, a fellow biker, went out drinking the night before the dead man's abduction, but Malkoun returned early and went to bed.

He told the media that he did not hear anything when his housemate was taken by force the next morning, even though police found blood and bullet casings at the scene. 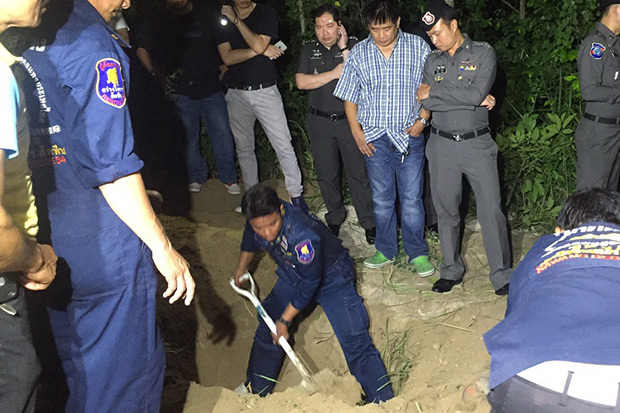 Rescuers dig up the remains of Australian biker Wayne Rodney Schneider from the Khao Cheechan area outside of Pattaya around midnight Tuesday. (Photo by Chaiyot Phuttanapong)