Cyclists with a flag of His Majesty the King flag ride past Wong Wian Yai, the site of the King Taksin the Great Monument, in Bangkok on Friday. (Photo by Pawat Laopaisarntaksin)

The Bike for Dad cycling event on Friday was a "great success" that showed Thai people united in support of His Majesty the King, Prime Minister Prayut Chan-o-cha said on Saturday.

"The special cycling event, Bike for Dad, has just concluded with great success, in correspondence with the aspirations of His Royal Highness Crown Prince Maha Vajiralongkorn," Gen Prayut said in his weekly broadcast.

The Crown Prince, together with Her Royal Highness Princess Bajrakitiyabha and HRH Princess Sirivannavari Nariratana, led the nation in cycling for 29 kilometres on Friday to mark the King's 88th birthday on Dec 5. 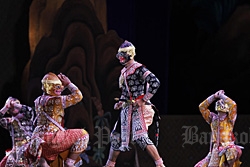 An elaborate Khon performance at the Royal Plaza on Friday night was part of the Bike for Dad festivities. (Photo by Pattanapong Hirunard)

Gen Prayut said the activity reflected the unity of all Thais in their desire to honour His Majesty, and he thanked all the participants and the people working behind the scenes who made the event a success.

He said he hoped that the solidarity shown on Friday would be carried on into the future because the country needs to present a united face to the world amid increasing competition.

"This bodes well for Thailand as we look forward to facing increasingly complex global challenges and as we are on the verge of the Asean Economic Community," he said in his Bringing Happiness to All Thais broadcast, which was moved to Saturday this week to clear airtime for Bike for Dad programming on Friday night.

The Bike for Dad event attracted cyclists in all 77 provinces of Thailand and 52 countries across all continents.

The actual number of people taking part has not been released, but 703,792 cyclists were officially registered nationwide, including 99,999 in Bangkok. Bangkok-based diplomats also joined the cycling day.

A Public Health Ministry report obtained by the Bangkok Post showed that one person died and 528 accidents were recorded during the event. A student was killed and 20 others injured when a truck carrying students and teachers who had taken part in the event was struck by a pickup in Nakhon Ratchasima on Friday night.