Buddhists nationwide will pay their last respects to the late Supreme Patriarch as the royally sponsored cremation ceremony for the revered monk will begin Tuesday.

The ceremony will be held over a three-day period, with his cremation scheduled for Wednesday.

His Royal Highness Crown Prince Maha Vajiralongkorn will perform a royal merit-making ceremony Tuesday to mark the start of the cremation ceremony at Wat Bowon Niwet in Bangkok where the body of the late Supreme Patriarch is lying in state.

On Wednesday, a royal urn holding the body of His Holiness will be carried on an ornate royal chariot in a procession from Wat Bowon Niwet to Wat Thep Sirintharawat where the cremation will be held. The Crown Prince will preside over the cremation on behalf of His Majesty the King. 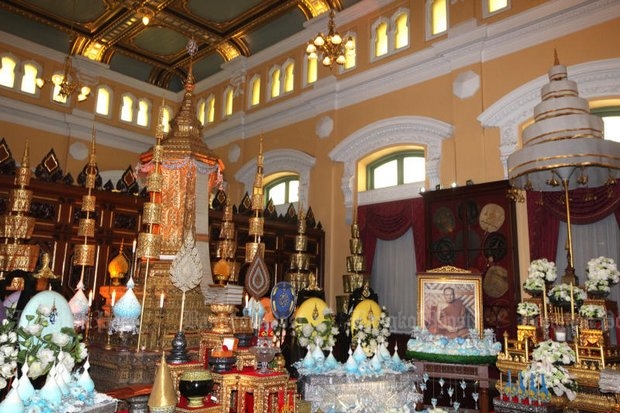 His Majesty the King provided the special ornate royal urn, which is traditionally reserved for a high-ranking royal family member, to be used at the funeral of the late Supreme Patriarch, who lies in state at Wat Bowon Niwet. (Photo by Wichan Charoenkiatpakul)

The procession will pass along Phra Sumen Road, Lan Luang Road, Krung Kasem Road and Thanon Luang Road. The 3.5km route will be closed to traffic from 8am to noon.

The public can place dok mai chan, or paper flowers used in cremation rites, in pavilions at temples nationwide.

On Thursday, the Crown Prince will preside over the ceremony to collect the remains of the Supreme Patriarch, which will then be returned to Wat Bowon Niwet for merit-making ceremonies.

Born on Oct 3, 1913, in Kanchanaburi province, Somdet Phra Nyanasamvara was appointed by His Majesty the King as the head of the Buddhist clergy in 1989. 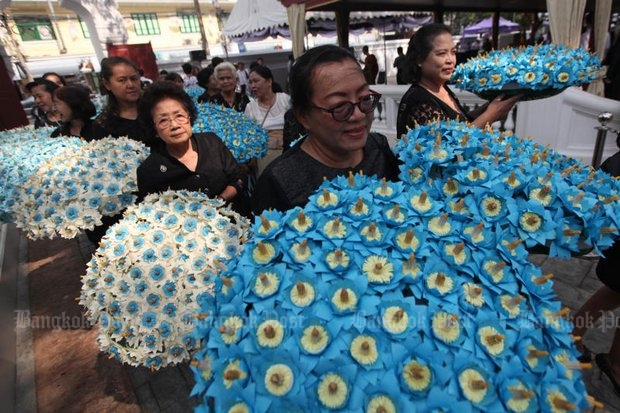 The faithful have donated nearly 3,000 dok mai chan, or paper flowers, for the cremation ceremony. The blue represents Friday, the day of his birth.(Photo by Wichan Charoenkiatpakul)