Infographic suspect to be held further

The Military Court approved a 12-day police request Monday to detain a lese majeste suspect accused in connection with the sharing of a corruption diagram in the Rajabhakti Park scandal.

Thanakorn Siriphaibun, 27, was arrested and detained for seven days before he was taken to the Military Court yesterday where police sought a further detention until Christmas Day.

The suspect is accused of lese majeste, inciting disorder and violating the Computer Crimes Act for posting an infographic implicating people in alleged irregularities in the Rajabhaki Park project. After the court approved his detention, he was handed over to the Corrections Department and taken to Bangkok Remand Prison. 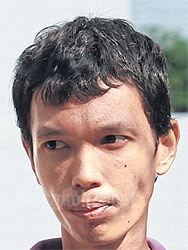 Mr Thanakorn also released a confession in a six-minute clip yesterday, saying he was responsible for the campaign against the government. He also asked other activists not to exploit his arrest to pursue their political agenda. He said he recorded and released the clip voluntarily.

Meanwhile, about 10 members of the New Democracy Movement led by Rangsiman Rome yesterday read out a statement criticising authorities for pressing lese majeste charges and inciting disorder against those who posted or shared the diagram.

Mr Rangsiman admitted the diagram was created by his group's Facebook page but called on Prime Minister Prayut Chan-o-cha to clarify the details.

He said he was ready to work with authorities but insisted that without the prime minister's explanations, the public could believe the government was using the lese majeste law to distract attention from the Rajabhakti scandal.

Student activist Sirawith Seritiwat yesterday lodged a petition with the Criminal Court seeking the release of another suspect being detained over sharing the Rajabhakti diagram.