His Royal Highness Crown Prince Maha Vajiralongkorn lights a cremation flower and places it inside the pyre at Wat Debsirindrawas where His Holiness the Supreme Patriarch’s body was cremated Wednesday. (Post Today photo)

Hundreds of thousands of people flocked to Wat Debsirindrawas and other temples around the country on Wednesday night to pay their last respects to the late Supreme Patriarch.

The main ceremony, which was royally sponsored, was held at Wat Debsirindrawas, while other temples in every province also organised events.

His Royal Highness Crown Prince Maha Vajiralongkorn chaired the ceremony at Wat Debsirindrawas which was also attended by other royal family members.

All temples holding the ceremony were packed by worshippers who wanted to be a part of the event to show their loyalty and respect to His Holiness. 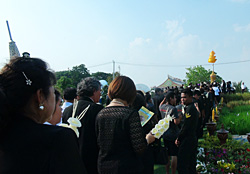 People in Kanchanaburi join a cremation ceremony on Wednesday at Wat Devasangaram, where the late Supreme Patriarch entered the monkhood when he was 14. (Photo by Piyarach Chongcharoen)

Somdej Phra Nyanasamvara Somdet Phra Sangharaja died on Oct 24, 2013 at the age of 100 at Chulalongkorn Hospital.

His Holiness was widely admired for his simple preaching since he entered the monkhood at Wat Devasangaram in Muang district in his native province of Kanchanaburi, when he was 14. He was also best remembered as the monk who had been assigned by the then Supreme Patriarch to take care of and give advice to His Majesty the King who was ordained as a monk in 1956.

His body was carried on a royal chariot in a procession from Wat Bowon Niwet Vihara to Wat Debsirindrawas on Wednesday morning.

Wat Devasangaram, where the late Supreme Patriarch was ordained, was long prepared for the cremation ceremony with people from all walks of life in Kanchanaburi attending the event throughout the day. They included the nieces of the late monk.