Cambodian Prime Minister Hun Sen on Friday stressed the need for more Thai investment as he pledged to support the investment climate in Cambodia. 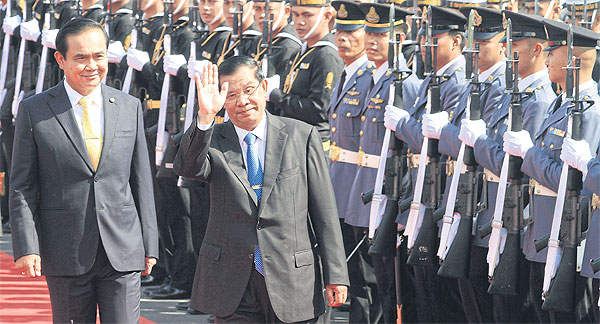 Hun Sen and his Thai counterpart Prayut Chan-o-cha on Friday agreed to triple bilateral trade between the two countries in the next five years.

In his keynote speech delivered at the "Thailand-Cambodia Business Forum" during his two-day state visit, Hun Sen said the country welcomed foreign investment and would work to maintain policies favourable to business which was vital for the country's economic development and security.

He said Cambodia's economic growth is mainly driven by four sectors — construction; garments and textiles; tourism; and agriculture. The country would need a flow of investment after the launch of the Asean Economic Community.

"Cambodia is open to Thai investors to invest in various sectors, including banking, tourism, farming, processed food and textiles," he told the forum at a hotel in Bangkok which was attended by 300 Thai and Cambodian businessmen.

He said large Thai companies such as Charoen Pokphand Group, SCG Group and TCC Group have invested successfully in Cambodia but the country was hoping to see more investment by small- and medium-sized operators.

"We also realise the importance of Thai small- and medium-sized businesses and we welcome them," the Cambodian prime minister said.

Hun Sen said Thai-Cambodian economic relations were the "based on compromise" compared with other countries. This was indicated by labour protection, border trade and transport, and rising economic cooperation.

"I don't want investors to see Cambodia just for its 15 million people. Rather, investments [in Cambodia] are for more than 30 million people in the Mekong sub-region," he said.

Hun Sen said Cambodia's economic growth was hailed by the World Bank as high and this year the economy was expected to grow by up to 6.9%.

"We've never seen anything like this in 65 years ... a government leader talking about his economic vision before the business community," he said.

He said Cambodia is the only country in the region which has seen 7% economic growth for 20 consecutive years.

The forum was organised by the Joint Standing Committee on Commerce, Industry and Banking and held yesterday afternoon after the Cambodian delegation was welcomed by the Thai government.

It was the Cambodian prime minister's first visit to Bangkok in 12 years. His delegation included Foreign Minister Hor Namhong, Minister of the Council of Ministers Sok An and Defence Minister Tea Banh.

Gen Prayut led his deputies in welcoming Hun Sen and his delegation at Government House before holding talks.

On Saturday, a joint Thai-Cambodian cabinet meeting is planned at Government House and a joint media conference is scheduled before Hun Sen returns to Cambodia in the afternoon.

Gen Prayut lauded the strengthening of Thai-Cambodian ties which were based on mutual respect and benefits.

He also expressed a willingness to increase cooperation with Phnom Penh and called for more exchange visits between the two nations.

To mark the 65th anniversary of diplomatic ties this year, Thailand and Cambodia would hold a friendly football match with the Thai tourism and sports minister Kobkarn Wattanavrangkul authorised to represent the prime minister. Hun Sen proposed the match be broadcast live to symbolise healthy relations between the two nations.

On energy cooperation, Hun Sen said both sides touched widely on energy issues and agreed to work together and pursue mutual benefits in areas where there were no conflicts.

On labour, the prime minister welcomed the planned signing today of two agreements on labour cooperation.

A memorandum of understanding on labour cooperation and an agreement on employment would elevate cooperation in solving illegal labour and human trafficking problems and speed up registration of Cambodian workers in Thailand so that they are protected by Thai law.

Both sides also agreed to develop the quality of their agricultural products. 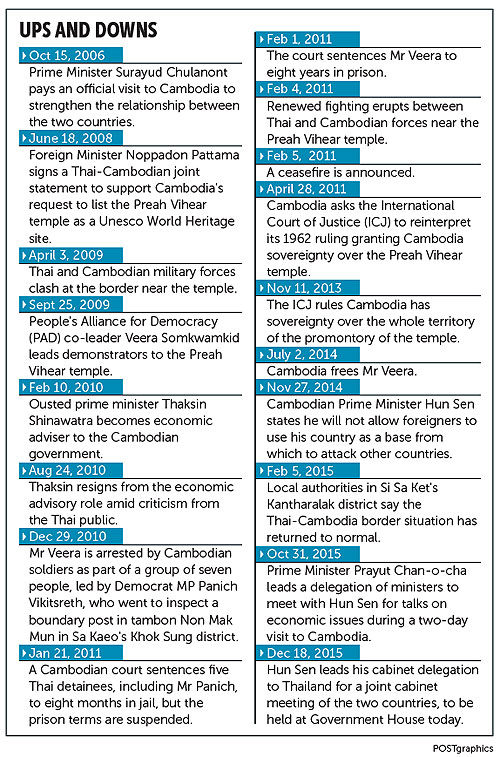