A model of the operations control centre is displayed at a ceremony held on Saturday to officially launch the Thai-Chinese train project at Chiang Rak Noi station in Bang Pa-in district of Ayutthaya. (Photo by Chanat Katanyu)

AYUTTHAYA — Thailand and China on Saturday officially launched their joint railway project even though construction will not start until May next year at the earliest.

The launch ceremony was a face-saving gesture intended to live up to pledges by both countries that work would begin this year. However, a disagreement over shareholding and financing of the venture has put it behind schedule.

Deputy Prime Minister Prajin Juntong and Chinese State Councillor Wang Yong led the ceremony at Chiang Rak Noi station in Bang Pa-in district of this central province as a symbol of their commitment to the 530-billion-baht scheme. 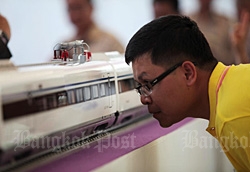 A man looks at a train model on display at the Thai-Chinese rail project launch ceremony on Saturday. (Photo by Chanat Katanyu)

They promised no turning back on the project although negotiators of the two countries remain apart on several issues including loan conditions offered by Beijing.

Chiang Rai Noi is slated to be used as an operations control centre for the train to be jointly invested by the two countries.

China also handed over some heavy equipment to Thailand at the event.

Thailand and China have agreed to build two medium-speed lines on the 1.435-metre gauge from Nong Khai to Map Ta Phut in Rayong via Kaeng Koi district in Saraburi and another route from Kaeng Koi to Bangkok.

Transport Minister Arkhom Termpittayapaisith said May 2016 construction start date remained unchanged despite their differences. The work is expected to take about four years.

The two countries have still not settled on their respective stakes in the joint venture, the investment cost and the interest rate on a loan from China.

Beijing wants to charge 2.5% interest while Thailand wants a rate no higher than 2%. Mr Arkom repeated on Saturday that China had promised the best it could offer to Thailand.

Since becoming deputy prime minister in charge of economic policy, Somkid Jatusripitak has put the Finance Ministry in charge of negotiations with China, taking over from the Transport Ministry.