Peter Effers (blue shirt) is detained after a pre-boarding search allegedly found 1.6kg of heroin strapped around his waist at Phuket airport on Wednesday morning. (Photos by Achadtaya Chuenniran)

A Danish man was arrested at Phuket airport with 1.6 kilogrammes of heroin as he went to board a flight to Copenhagen on Wednesday morning. 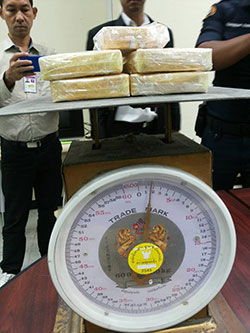 The 1.6 kg of heroin found on a passenger boarding a flight to Copenhagen at Phuket airport on Wednesday morning.

Airport deputy director Thani Chuangcho said the drugs were discovered during the pre-boarding security inspection of carry-on bags. Staff became suspicious of the waist support belt worn by the man, named by police as Peter Effersoe, 46.

White power found concealed in the belt was tested and found to be heroin worth approximately 3 million baht.

The arrested man had been trying to board a flight at 8.20am operated by Thai Airways International to Copenhagen in Denmark.

Police were informed and the man was arrested.

Police said under questioning Mr Effersoe allegedly admitted  it was the third time had carried heroin. He had been paid around 100,000 baht for each trip, taking the drug to a  destination in Belgium.