Farmers in the southern province of Phatthalung say they are receiving strong and steady orders for their indigenous Sang Yod rice at healthy selling prices of 18,000 baht per tonne.

Jakkrit Samakkhi, head of a community enterprise in Bang Kaew district, said growers of Sang Yod rice were enjoying both price and market security as demand was growing for the grain.

Normal Sang Yod rice sells in the market for 18,000 baht per tonne, about double the price of conventional rice, while the organic version can fetch 20,000 baht, he said.

The number of farming households in his group now totals 21 and their cultivation area has expanded from 114 rai to 200 rai in the past year, Mr Jakkrit said.

People in Tamot district of Phatthalung also grow Sang Yod rice on 200 rai of land. Arun Paichamnan, head of the rice growers' group there, said the goal was to have 500 rai for Sang Yod paddy, including 300 rai for the organic variety. 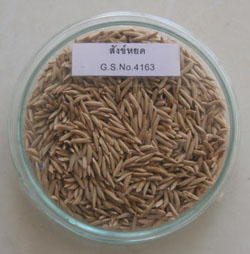 Tamot rice grower Sak Phetsong said he had nine rai of Sang Yod paddy and another rice variety and had cut his cultivation cost from 1,500 baht to 700 baht per rai by sowing the grain.

Nat Onkaeo, president of an association of Sang Yod rice growers in Phatthalung, said the total Sang Yod plantation area had dropped from 15,000 rai to 12,000 rai in the past year because prices had fallen from 23,000 baht per tonne to 18,000 baht this year. He attributed it to the rushed sales of old Sang Yod stocks and expressed confidence that prices would improve.

Singaporean buyers recently arrived in Phatthalung and ordered all kinds of local organic rice as well, he added.

"Farmers should join Sang Yod growing groups and turn to grow highly in-demand organic Sang Yod rice to make substantial income," said Mr Nat. "This year there are about 12,000 rai of Sang Yod rice. The yield is about 400 kilogrammes per rai and the selling price is 18,000 baht per tonne on average."

The native rice with long and thin grains is popular for its delicious taste and higher nutrition compared with other kinds of Thai rice, according to the commerce ministry office in Phatthalung.