SURAT THANI--A 39-year-old nurse on holiday has received an avalanche of praise from netizens for saving the life of a middle-aged German cyclist who collapsed from a heart attack on a road in Muang district on Saturday.

Srikanya Chuerob, 39, a nurse at Surat Thani Hospital who saved Gunter Retsch's life, said she was travelling in a car with her family on the way to start their holiday in Ban Na San district when they came across the German man and his friend. The friend was holding Mr Retsch with one hand and frantically waving with the other to attract attention. 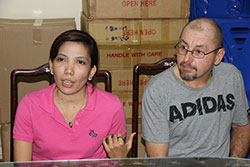 She stopped her car and rushed over to the two men. Mr Retsch, 49, was having a convulsion, after which he collapsed. Ms Srikanya immediately started CPR treatment while others alerted an ambulance to take Mr Retsch to Surat Thani Hospital.

Ms Srikanya said she was pleased that she was able to help someone. She and her family scrapped their plans for a New Year holiday and went to the hospital with the ailing German man.

Mr Retsch, whose condition is gradually improving, said he was cycling with his German compatriot from Surat Thani’s Koh Phangan district on the way to Krabi, where they planned to spend 12 days with other cyclists before returning to Koh Phangan.

He thanked Ms Srikanya for saving his life. He said he appreciated her kindness and that of other Thais and would never forget them.

Mr Ouaychai said the patient’s condition was gradually improving and he could eat and drink. But he would remain in the hospital for a few more days for a thorough check-up.

The deputy governor praised Ms Srikanya for helping the sick foreigner even though she was not on duty at the time.