More than 300 workers rallied at the Labour Ministry yesterday after they claimed they were unfairly suspended from work by a factory in Rayong. 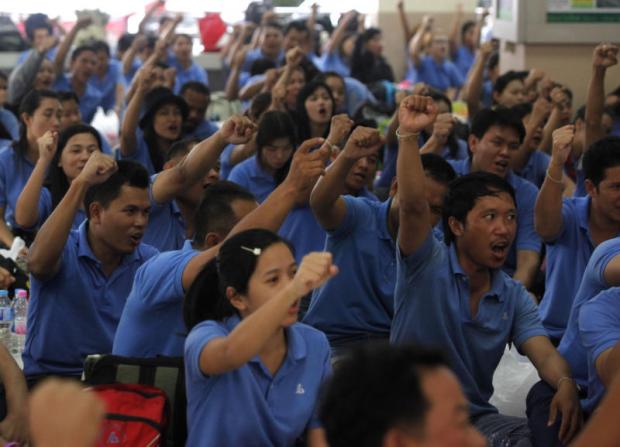 Workers of Sanko Gosei Thailand raise their fists in a show of solidarity at the Labour Ministry as they were suspended from work at the factory in Rayong. Pattarapong Chatpattarasill

Employees of Sanko Gosei Thailand, a manufacturer of industrial products for automobiles in the eastern seaboard industrial estate in Rayong, say they were illegally pushed aside in favour of outsourced labour and want the government to step in.

The workers brought with them tents and personal belongings as they prepared to spend the night while waiting for the authorities' response.

Amorndet Srimuang, president of the firm's labour union, said the firm had removed about 600 workers from their jobs and replaced them with those who were outsourced.

Although the workers involved technically remain on the firm's payroll, they do not earn wages because they are not physically working, according to Mr Amorndet, adding all 600 workers belong to the union.

He said the unionised workers found themselves without work after the firm partially shut down its operations, citing persistent financial losses.

But the workers argued the firm was doing well financially because it had the money to hire outsourced employees.

The suspended workers staged a sit-in protest outside the factory but they had to move after the firm secured a court order disbanding the rally before New Year.

In September last year, the union demanded the company pay the workers a year-end bonus and a higher wage.

However, the two sides failed to agree, despite repeated negotiations.

The workers later referred the dispute to the provincial welfare and labour protection office, hoping the agency would intervene.

However, they have now decided to come to Bangkok to put their case directly to the ministry.

Mr Amorndet said the firm claimed it was in the red. However, he said the company's balance sheet was gradually improving after the workers put in their best efforts to meet orders from customers, who include major automobile manufacturers.

Mr Amorndet said the workers who faced the suspension were desperate as they had daily expenses to pay. The recruitment of the outsourced workers could violate labour relations law, the union president said.

The company could not be contacted for comment yesterday.